You are here: Home / Africa / The Pentagon’s new ‘scramble for Africa’ 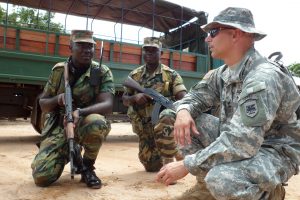 When news broke of the October 4 ambush and deaths of four elite Green Beret soldiers in Niger, the immediate reaction voiced among congressional leaders and echoed generally in the media was: we have troops in Niger? But the bigger questions of the US military’s increasingly sizable footprint in Africa (or what has long been called our ‘Shadow War’) quickly disappeared from public debate, instead, in usual fashion the media quickly focused on myopic details of phone calls and whether Trump’s handling of the aftermath was “presidential” enough, like reported by zerohedge.com.

Gone were the larger looming questions the average American might rightly ask: when did Congress authorize or oversee operations in Africa which would put “boots on the ground” in potential live combat zones? What is the ultimate purpose in our being in Africa? Were the tragic deaths, and subsequent sufferings of their families worth whatever nebulous mission they were tasked with? If this was about fighting ISIS in Africa, how did ISIS establish a presence in Africa to begin with? (hint: it could have something to do with US-driven regime change wars in Iraq, Libya, and Syria).

But as has been the case with all administrations going back to 9/11, the moment the White House and congressional leaders invoke those magical letters, AUMF (the 16-year old authorization for use of military force), the media quickly falls in line, in spite of the fact that the War Powers Resolution (WPR) was designed to prevent the president from unilaterally placing US troops in harm’s way (though because it’s Trump, and not Obama, even CNN will publish the occasional and rare anti-war op-ed).

Meanwhile on the “serious” network talk shows with “expert” panels, such inconvenient big picture questions are never dealt with, not even as the Pentagon absurdly offers the rationale of military expansion in Africa as key to a “global strategy” as ISIS is a “global threat” – or so we are told. AFRICOM (US Africa Command) defines its mission as to defeat “transnational threats in order to advance U.S. national interests and promote regional security, stability, and prosperity.”

So if we are now in the business of defeating all potential threats labelled “transnational” then of course a large-scale military presence can be justified just about anywhere, no questions asked (akin to Dick Cheney’s notorious “one percent doctrine”: if there was even “a one percent chance” that a threat was real “we have to treat it as a certainty in terms of our response.”) Indeed, at the very moment the Islamic State is in rapid retreat and is on the verge of collapsing in Iraq and Syria, the mantra is now once again (conveniently) ISIS! ISIS! EVERYWHERE! …And now especially on a whole new continent: Africa.

The below map has been around for a while, but its creators assure us it was approved by “respected counter-terrorism experts”…

Senator Lindsey Graham, of course, loves such jingoistic talk. He told Meet the Press over the weekend that “he had no idea” there were 1000 troops in Niger, and it then took him less than a minute to invoke 9/11 and the AUMF (predictably) to say “the war [on terror] is going to places we haven’t heard of before” – after which he literally described it as “endless”. But for Graham and other hawks, however, this presents yet another opportunity for US military expansion, including ever-swelling defense budgets, and more “projection” of US power abroad. Though the US now has troops in 53 out of 54 countries, Graham was elated at the idea that the US military was fighting “radical Islamic extremism” in Niger and throughout Africa.

Sen. Graham said further, “If you don’t think it’s a generational struggle, you don’t understand the war. If you think it’s limited to the Mid East, you don’t understand the theology. It is spreading throughout the world,” and added, “Particularly Africa.” Of course, Graham – with his chicken-hawk non-existent war record understands neither war nor Africa: this is simply the classic Graham-McCain-neocon recipe for being everywhere, all the time.

And keep in mind this was his reaction upon discovering there were troops in Niger in the first place after learning of the deaths of four young soldiers. Senator Rand Paul responded best when he said on Monday, “You know you are in too many wars in too many places when even warmonger Lindsay Graham can’t keep track anymore.”

But the big question ignored in mainstream media is this: Is the United States in the midst of a new military “scramble for Africa”?

Below are astounding statistics and figures excerpted from veteran Pentagon and Africa researcher and journalist Nick Turse’s new investigation into the Pentagon’s presence in Africa titled appropriately, The war you’ve never heard of: