You are here: Home / MidEastGulf / The Pentagon’s missile full of swords has likely struck again in Syria 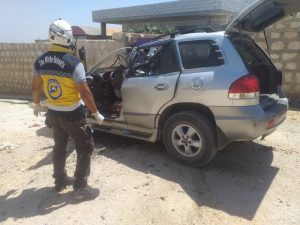 The U.S.-led military coalition in Syria likely used a unique variant of the beloved Hellfire missile to kill a mercenary trainer who recently worked with an al Qaeda-affiliated militant group there, according to photos from the scene of the strike, like reported by taskandpurpose.com.

The Syrian Observatory for Human Rights reported last week that a drone strike likely affiliated with the U.S.-led international military coalition in the country was responsible for killing Abu Yahya al-Uzbeki, an independent “military trainer” recently affiliated with the al Qaeda-linked Hurras Al-Din organization, while he was traveling in Syria’s Idlib province.

Photos of the aftermath of the strike on al-Uzbeki’s vehicle show a relatively intact car rather than a fiery wreck, suggesting that, as with similar strikes in the region, the coalition employed the notorious R9X variant of the AGM-114 Hellfire missile, a non-explosive weapon that can best be described as a 100-pound flying switchblade.

First publicized by the Wall Street Journal in 2019 and colloquially known as the “flying Ginsu” or “ninja bomb,” the R9X forgoes an explosive payload in favor of a kinetic warhead containing a halo of blades that deploy moments before impact, eviscerating a target and, ostensibly, reducing the potential civilian casualties that might otherwise accompany a large explosion from a traditional warhead.

Developed in a collaboration between the Defense Department and Central Intelligence Agency, the R9X Hellfire variant technically a secret. However, the distinctive effects of the munition have become increasingly recognizable since the U.S. government reportedly started deploying it downrange in 2017.

Indeed, the impact patterns on al-Uzbeki’s vehicle appear to match those on the car belonging to Qassam al-Urduni and Bilal al-Sanaani, two leaders of Hurras Al-Din who were killed in a similar drone strike in June of this year in northwestern Syria.

That same pattern also appeared on the vehicles of Abu Ahmed al-Jaziri, a foreign fighter for al Qaeda offshoot Hayat Tahrir al-Sham who was killed in a drone strike in December 2019, and Ahmad Hasan Abu Khayr al-Masri, the al Qaeda second-in-command who, according to the Wall Street Journal, the CIA allegedly killed in in February 2017.

While all three of those strikes, like the al-Uzbeki one, took place in Syria’s Idlib province, the weapon has also been deployed in Yemen in recent years, according to the Wall Street Journal. And according to The War Zone, photos from the aftermath of a January 2019 airstrike against a suspected Taliban commander in Afghanistan suggest the use of the missile there as well.

It’s unclear how many R9X missiles the Pentagon has in its arsenal: the Army and Air Force’s fiscal year 2021 budget requests for missile procurement make no mention of this specific Hellfire variant, although the Air Force’s budget request does note that multiple variants “may be procured based upon operational requirements for various warheads and the enhanced weapon engagement zone.”

But as I previously wrote, the reported deployment of the R9X against suspected terrorists downrange suggests the Pentagon is increasingly embracing the Hellfire variant as a low-collateral precision strike weapon — a move that suggests the Pentagon’s flying switchblade is moving from high-profile oddity to a conventional staple of the DoD’s arsenal.