You are here: Home / Senza categoria / The options facing the Trump administration’s war on ISIS 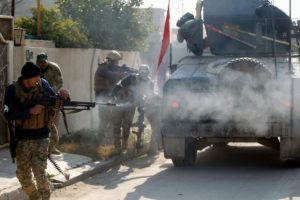 It appears that developing a new strategy for the Middle East, most notably one to combat terrorism, is among the priorities of the new Republican US administration, like reported by aawsat.com.

Congress is seeking to change the policy of Democratic President Barack Obama, which led to further Iranian expansion in the region, and yet yielded some victories against the ISIS terror group, especially in Iraq.

In his first speech before Congress since his election as president, Donald Trump, asserted that Washington will continue to cooperate with its traditional allies in the Middle East in order to defeat ISIS.

In February, former US Ambassador to Iraq and Turkey and current expert at the Washington Institute, James Jeffrey, gave a testimony before Congress on how to combat ISIS. He proposed forming a new strategy that would “exert immediate efforts, led by the US, to destroy the terror phenomenon because this is the most pressing issue in the region.”

Reports that followed the testimony said that the Trump administration completely agrees with Jeffery’s stance.

The threats facing the US interests in the region are not limited to ISIS, but they include Iran and Russia, whom Tehran views as a partner in its expansionist agenda. Washington must therefore take into account the Iranian-Russian partnership as a real threat to national US interests.

The new US strategy should not only look into destroying ISIS, but it should devise a plan that would ensure the cooperation of the parties that can help achieve this long-term goal. Experts said that Washington must cooperate with Turkey to restore the Syrian city of Raqqa from ISIS control. Ankara meanwhile, must accept that this goal requires the participation of effective players that do not curry its favor, mainly the Kurdish People’s Protection Units (YPG).

Moreover, destroying ISIS and putting a halt to Iranian and Russian ambitions in the Middle East require looking into the aftermath of achieving these missions. Questions over the geo-political conflict in the region and who will lead the transition period need to be addressed, while preserving US interests, eliminating Iran’s influence, and accepting Russia’s “inevitable” presence.

In Iraq, Jeffery noted that the Iraqi forces’ current advance on ISIS in Mosul will soon end. This will force the militants to head to the town of al-Hawija. The battle for the town will require “field maneuvers” by the Kurdish Peshmerga and Shi’ite Popular Mobilization Units militia. The US will have to tread carefully with these groups in order to ensure its long-term interests in Iraq.

The situation appears much more complicated in Syria, said Jeffery. To that end, he proposed five options that the US could adopt to eliminate ISIS from its Raqqa stronghold.

The first option calls for relying on the YPG and the predominantly Kurdish Syrian Democratic Forces. The Trump administration rejected the choice because these groups are not properly equipped to wage guerrilla warfare. One solution called for arming the YPG, but it was refused because it will create tensions with Ankara. The option is also not viable due to the various disputes between Kurds and the Arab tribes surrounding Raqqa.

The second option calls for establishing a Turkish alliance led by the International Alliance and which employs the Free Syrian Army (FSA) and Turkish infantry units. The significance of this option lies in Turkey’s ability to establish itself in the predominantly Arab and Sunni surroundings, where it will likely be welcomed. The presence of Turkish forces will however place it at odds with the YPG and the Syrian-Iranian-Russian alliance.

The third option is a merger of the first two and seems like the best choice for the Trump administration, said Jeffery, because it caters to Turkey’s fears regarding Kurds and uses the FSA to liberate Raqqa. Achieving the actual merger itself will be the main diplomatic challenge, especially in creating trust between Turks and Kurds and between the US and the FSA.

The fourth option relies on the Russian-Syrian-Iranian alliance to liberate Raqqa, but it is not viable due to the inaccuracy of Russian airstrikes and the majority Sunni population’s opposition to regime and Iranian militias. Jeffery therefore said that the US should only make do with the intelligence that this alliance can provide.

The fifth option, one which the Pentagon seems most in favor of, calls for US and NATO troops to liberate Raqqa.

Once Raqqa and Mosul are liberated, the US will have to ensure that its long-term interests are preserved. The interests of the people must be first met and the situation should be remedied so that terror groups cannot seep into society once again. In order to do so, Washington needs to intervene to overcome the challenge of the various armed groups, ensure the unity of Iraq, limit Iran’s influence in Iraq and Syria, confront Russia’s expansion and separate it from Iran and Syria.

A historic reconciliation should be reached between the YPG and Turkey, led by President Recep Tayyip Erdogan, and the possibility of arming the FSA should be an option. These goals demand that the US deploy troops on the ground in Syria and Iraq to train the Peshmerga and Iraqi soldiers and support the establishment of a “free zone” around Raqqa and “Turkish region” in northern Syria.