You are here: Home / Mediterranean / The option that Nato has 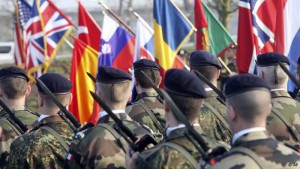 The North Atlantic Council (NAC) at the level of defence ministers is meeting at Nato headquarters in Brussels this week to discuss where there are wars, currently just under 20, in the world. A decision on whether or not to start a bombing campaign in Libya is one of the top items on the agenda.

Most important from an Isis point of view, is Libya’s civil war. The political situation has gone from the sublime to the ridiculous, a clichè reflecting the decision of Libya’s United Nations-created ‘unity’ government to move out of exile in Tunisia – not to Libya, but further away, to Morocco.

Conjured into being by the UN in December, the grandly-named Government of National Accord (GNA) is supposed to unify the country, end the civil war, staunch migration and crush Isis.

In fact, this ‘unity’ government is doing nothing of the kind. It consists of a nine-strong presidency council chosen by ‘Libya Dialogue’, a negotiating body much of which the UN itself appointed. Both Libya’s existing, warring governments have already rejected it: the House of Representatives, the internationally-recognised government in Tobruk, voted it down last month while its rival General National Congress (GNC) in Tripoli announced its members face arrest if they set foot in the capital.

Even the present regime in Tunisia, it seems, is uncomfortable at hosting this ‘virtual government’, hence, its decision on February 3 to move from a hotel in Tunis to a hotel in the Moroccan seaside resort of Skhirat.

Tunisia’s discomfort though comes more in part courtesy of Rached Ghannouchi, president of Tunisia’s Ennahda Islamist party, anxious not to offend his fellow Islamists, notably his close friend of decades, Abdel Hakim Belhadj, who controls the Tripoli Mitiga Airport and who supports the Islamist GNC.

In the middle of this uncomfortable storm is Fayez Seraj, until December a middling Tripoli businessman-cum-politician with no real enemies and no real political clout. He was chosen not by the Libyan people but by UN envoy Martin Kobler to lead the GNA as Prime Minister.

The move to Morocco was the main subject of debate by the presidency members in Tunis, with some arguing the switch should be to Malta, a move that may come to pass in what looks like a prolonged period of exile.

But the one thing this so-called government will not do stuck in exile is fix Libya’s problems. Isis continues to take advantage of Libya’s chaos to establish themselves. Creating three governments where there were two by the UN will not change this.

American military power can without doubt crush Isis and heavy hints have been dropped last week, led by the Pentagon declaring it has operatives in Libya seeking “partnerships” with militias.

In Rome, also last week, in the second multilateral meeting in two months on Isis in Libya, US Secretary of State John Kerry said the last thing anyone wants “is a false caliphate with access to billions of dollars in oil revenue”.

Interestingly, the Pentagon ‘partnership’ with local militias recently seems to have not been agreed with the UN. So it appears some formations may be thinking they do not want to be part of the UN peace process if they get a better deal from the Americans.

Enter Italy. Its Defence Minister, Roberta Pinotti, said there was “total agreement” that a Libya unity government should ask for help to fight militants before it could be given – to avoid fuelling “jihadist propaganda” of yet another “Western invasion”.

Deadlines for such a unity government are set by the UN and regularly pass their dates without comment, the latest one being February 15.

According to the UN, international action against Isis can happen only if the GNA can get to Tripoli and then issue a formal invitation for the strikes. But, due to the security situation, they cannot get to Tripoli also because, for the Libyan people, the GNA has zero legitimacy based in a third country. Another Catch 22 for Libya again.

Nato and its allies destroying Isis first by air wherever it exists in Libya, even Iraq and Syria, is the only option left and sooner or later that will mean boots on the ground from Nato and its Arab allies.

Can America’s generals, allegedly at odds with Barack Obama, persuade their Commander in Chief, who seems only obsessed with humanitarian aspects in the Mena region, to take decisive military action? Let’s hope so. It seems unlikely for the moment.