You are here: Home / Analysis / The ongoing “cold war” between Morocco and Algeria 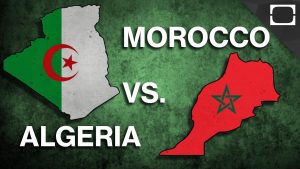 In his speech of November 6, 2018, King Mohammed VI extended a hand for peace and goodwill to the Algerian government, with the hope to start a new chapter of good relations. Nevertheless, the Algerian government did not respond to this initiative of friendship, so far. And a no answer posture is in many ways equivalent to saying unofficially: no way, like reported by eurasiareview.com.

During the long spell of French colonial presence in Algeria that lasted 130 years, France considered this country as a French department: Algérie française. When the independence war started (November 1, 1954 – March 19, 1962,) realizing that it is going to, ultimately, leave Algeria, the French authorities turned to the Moroccans asking them to sit down to negotiate the restitution of territories that they have cut off from Morocco during the long colonial spell. King Mohammed VI, in the name of the pan-Arab brotherhood utopia, of the time, turned down the French initiative saying that undertaking something in this vein and at that time in history is equivalent to stabbing a sister country in the back and that after independence Algeria will, unilaterally, restitute the territories in question. However, after independence in 1963, Algeria flatly refused to do such a thing on the grounds that the territories in question are fully Algerian.

The abrupt refusal escalated the tension between the two countries and a war known as the « Sand War » ensued in September 1963 leading to the defeat of Algeria. Rather than hold on the territory grabbed during the brief war by the Moroccan army to undertake the necessary land swap later on , Hassan II in, an unexpected move, instructed the army to return home to avoid a long term conflict with Algeria, but the harm was done and animosity towards Morocco was born in the Algerian official circles.

During the era of President Houari Boumedienne (1932-1978), in the official narrative, Morocco was seen as the enemy because it tried to cut Algeria in its teens. The official policy among political leadership and army strategists stated clearly, in private, that Morocco is a great danger to the unity and survival of Algeria and, as such, must be challenged in all areas and at all times.

One first such challenge was the Sahara issue. While Boumedienne in 1974 accepted the takeover of the territory by both Morocco and Mauritania, yet he adopted the Polisario Front, in 1975, that was calling for full independence of the Spanish-colonized territory of the Sahara.

The tripartite agreement between Spain, the colonial power, Morocco and Mauritania, known as Madrid Accords of November 15, 1975, ceded the territory to these two latter countries.

To mar the Moroccan-Mauritanian takeover, Algeria armed the Polisario which launched attacks on both Morocco and Mauretania, the latter unable to bear the brunt of such military onslaught left the territory and ceded its part to Morocco in 1978. During the 70s, 80s and 90s of the last century Algeria not only armed the Polisario but, also and most importantly, bought external support for it in the Organization of African Unity -OAU- and in the UN, thanks to the petrodollars it got from its oil revenues.

Morocco countered Polisario’s militarily efforts by building a defensive wall (The Moroccan Western Sahara Wall is an approximately 2,700 km (1,700 miles) long structure, mostly a sand wall running through Western Sahara and the southwestern portion of Morocco) that stopped the latter’s encroachments in the territory under Moroccan control. On the other hand, Morocco put forth an autonomy plan for the territory (The Western Sahara Autonomy Proposal,) an initiative, proposed in 2006 as a possible solution to the Western Sahara conflict. This plan has been since receiving a lot of support from many nations of the world and is considered as a viable political solution to the conflict, for the time being.

Besides the Sahara conflict the official Algerian enmity is expressed through the actual closing of territorial borders and the cessation of all possible economic activity. In 1994, Marrakech and most precisely Hotel Asni witnessed one of the first terrorist attacks in the country. The attack that left two people dead was carried out by three Algerian-French nationals. Morocco back, then, accused the Algerian intelligence services of planning the deadly shooting, a claim that worsened the diplomatic relations between the two neighboring countries.

Morocco, consequently, closed off its borders briefly but Algeria used such a decision as an excuse to impose a permanent closure on the borders to stop Algerians visiting Morocco, in millions, and spending lots of money that would benefit and strengthen Moroccan economy. It is, also, an excuse to prevent the Algerian people from witnessing the tremendous development realized by Morocco in various sectors of the economy in spite of the fact that the country does not have any oil.

The Algerian animosity toward Morocco is exclusively the work of the Algerian military that control the country through docile political parties and an incapacitated president. Other than that, the Algerian people feel close to the Moroccan people because of shared religion, language and culture and they express this closeness every time they are given the opportunity.

What Will Alter This Belligerent Attitude?

The hate of Morocco and what it represents is ingrained in the Algerian military psyche, and only two possible developments can, ultimately, put an end to it.

Algeria goes bankrupt economically and allows in the IMF and the World Bank to clean its financial mess and this will open economic borders and allow Moroccan companies to do businesses in this country.

The future possible cutting of subsidies will bring the population to the streets and a revolution ensues that puts an end to military control and brings democracy to the country.

Barring these two developments Algeria will continue holding a grudge against Morocco and the Maghreb Union will be just a wishful thinking if not a political joke, to say the least.