You are here: Home / Senza categoria / The next level of Islamic State: the punishment campaign 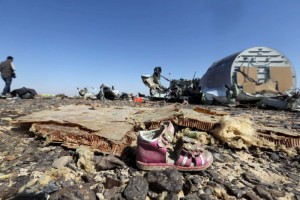 The Islamic State group has been touting the killing of “Russian crusaders,” namely the downing of Metrojet Flight 9268 over the Sinai Peninsula on Oct. 31 with 224 people aboard, as a major achievement in its retribution campaign against Russian President Vladimir Putin over the Russian involvement in the Syrian civil war.

Putin could not have imagined that his gambit in Syria would exact such a heavy price, but his considerations are not the issue. The issue is the leap in the level of threat Islamic State’s offshoots in Sinai pose to the Egyptian regime, the Sinai tourism industry, and to Israel, which is no stranger to terrorist attacks on its southern border.

Al-Qaida and its nefarious ilk have been struggling to replicate the horrific success of the 9/11 attacks, no doubt because of the security clampdown worldwide, but also because terrorist groups have lost territorial strongholds that allowed them to prepare for an operation of that scope. At the time, Taliban-controlled Afghanistan was the logistic point of departure for the terrorists, but the American invasion of Afghanistan left the terrorist group devoid of its main base of operations.

Islamic State’s considerable grip on Iraq and Syria, in the heart of the Middle East, and the abundance of foreign funding it is given have a significant effect on the threats in the bigger regional picture. Islamic State uses the expansive territory it controls to continue targeting Arab nations, but it also has the West, Russia and Israel in its sights.

The past few years have seen Wilayat Sinai stage several deadly attacks against Israeli interests, proving that having a strong physical presence on the ground on the one hand, and a direct line to logistical and financial support from a parent terrorist group in Syria and Iraq on the other, is a lethal combination.

Moscow and Cairo are likely to spend the next few days wrestling over questions of egos and the affront they suffered at the hands of London and Washington, whose officials were quick to announce they had evidence suggesting it was a bomb that caused the Russian airliner to disintegrate in midair; but sooner or later, the Russians and the Egyptians will have to admit what the global community already knows — this was an act of terrorism.

Egypt is concerned, and rightfully so, over the crippling blow such an admission would deal to its tourism industry, invaluable to the country’s struggling economy. Nevertheless, Cairo knows that whoever was able to sneak an explosive device onto a foreign airliner will be able to carry out equally sophisticated attacks in Egypt proper, and therefore it must confront the issue head on.

The main questions still unanswered are how the device was made, how it was smuggled into Sharm el-Sheikh International Airport, and most importantly, how it was planted on the Russian plane. Much as when the smuggling industry in Sinai was flourishing, before the Egyptian crackdown on Hamas and its grid of tunnels, there is no shortage of security officials — corrupt or simply inept — willing to turn a blind eye for a price.

While the immediate problem is that of Egypt and Russia, it may soon become an issue plaguing the international community, including Israel. Islamic State’s recent video, issuing a series of threats in broken Hebrew, was dismissed by the Israeli defense establishment, but it has become clear that this jihadi group is able to both aim high and follow through.