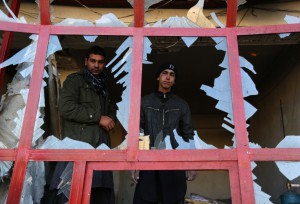 When representatives of four nations meet Monday to plan peace talks aimed at ending nearly four decades of fighting in Afghanistan, the most important figure is almost sure to be absent.

Akhtar Mohammad Mansour, the leader of the Taliban, is likely to remain in hiding when U.S., Afghan, Pakistani and Chinese officials meet in Islamabad to lay the groundwork for future talks. Nonetheless, his shadow will hang over the proceedings.

In the six months since word leaked that the Taliban’s founder, Mohammad Omar, had died in 2013, Mansour has proved to be nearly as enigmatic as his reclusive, one-eyed predecessor. Many current and former Taliban members say Mansour is a moderate who represents Afghanistan’s best chance in more than a decade to strike a deal with the Islamists. He is a pragmatist, they say, who, as the Taliban’s aviation minister, recruited communists to keep the nation’s airplanes operating.

“In the Taliban movement, there are not a lot of people like Mullah Mansour,” said Waheed Mojda, a former Taliban diplomat who is now an analyst in Kabul. “He is a very good man for peace talks. He is a man who understands the situation of the world and not just the continuation of fighting.”

Under Mansour’s command, however, the Taliban has not just continued to fight, it has excelled at it. In October, the Taliban overran the northern city of Kunduz. A month later, the insurgents swept through the southern province of Helmand, capturing the city of Sangin. Although both cities were eventually regained by Afghan forces, the Taliban controls more territory than at any point since it was driven from power in 2001.

Despite those gains, Mansour has faced opposition from within Taliban ranks. He has been accused by splinter groups of ruthlessly assassinating rivals and endorsing democracy, among other things. Some disaffected Taliban members have even joined their archrival, the Islamic State.

“We don’t trust Mansour,” said Abdul Manan Niazi, the spokesman for one Taliban splinter group. “He has even said it’s possible that he will accept a democratic system in Afghanistan.”

Adding to the confusion surrounding Mansour are claims that he was wounded in a shootout last month near his home in Quetta, Pakistan.

Most analysts disagree, pointing to an audiotape released after the alleged shootout as evidence that Mansour is alive. But uncertainty clings to both Mansour and the upcoming talks.

His life is mostly a mystery. According to his official Taliban biography, he was born in 1968 in the village of Band-i-Taimoor in rural Kandahar, a poppy-growing province at the heart of the drug trade, and was wounded several times while fighting the Soviets as a teenager.

“He was an ordinary fighter, said Syed Muhammad Akbar Agha, a former Taliban commander who fought the Soviets alongside Mansour. “I don’t remember him being good at shooting or blowing up tanks.”

If Mansour was exceptional, Agha said, it was because he was more patient and tolerant than most other mujahideen. “From a religious and personal point of view, he was a moderate person.”

After the Soviet withdrawal in 1989, Mansour studied Islamic texts at a madrassa in the Jalozai refugee camp in Pakistan. Shortly after Omar founded the Taliban in 1994 to end corruption and infighting among the mujahideen, Mansour hired five buses and drove 150 men to Kandahar to join, according to journalist Sami Yousafzai.

When the Taliban captured Kandahar, Omar appointed Mansour head of airport security. And when the Taliban swept into Kabul a year later, Mansour became aviation minister.

Mansour’s allies and enemies alike point to his time in that post as proof of his character. Like other Taliban ministers, Mansour had no technical expertise. He had inherited a fleet of damaged planes but had no idea how to fix them. Unlike other ministers, he actively recruited communists who had fled the country.

“He started to collect technicians and engineers,” Mojda said, “and slowly, slowly, they started to repair these aircraft.”

Mansour flew to Germany in 1998 to buy airplane and helicopter parts, according to Yousafzai.

To his supporters, Mansour’s five years in charge of aviation shows flexibility that bodes well for a post-conflict Afghanistan. But to his detractors, it reveals dangerous signs of self-interest.

“He was trafficking drugs using the airlines,” said Niazi, now Mansour’s rival but at the time a Taliban governor and spokesman. “I have seen it with my own eyes. He was sending drugs to Dubai inside candy wrappers.”

Current and former officials from the United States, the United Nations and Afghanistan concur.

“Mullah Mansour, when he was not yet a leader of the Taliban, was among those Taliban involved in drug trafficking,” said Hashim Wahdatyar, Afghanistan program officer for the U.N. Office on Drugs and Crime. “But the whole Taliban regime was . . . and still is,” he added, alleging that Mansour sits atop a drug network that nets the Taliban more than $200 million a year.

When the U.S.-led invasion toppled the Taliban in late 2001, Mansour surrendered and was allowed to return to Kandahar, according to journalist Bette Dam. But after U.S. forces repeatedly raided his house, Mansour fled to Pakistan. From there, he helped plot the group’s resurgence, persuading many to rejoin.

As other Taliban commanders were arrested or imprisoned, Mansour rose through the ranks. When Omar’s deputy was arrested in Pakistan in 2010, Mansour was named as his replacement.

Mansour became Omar’s right-hand man “kind of by default,” said Thomas Ruttig, co-director of the Afghanistan Analysts Network. Again, however, Mansour proved surprisingly proficient. “He effectively led the Taliban during a very complicated time, which was the U.S. surge in 2010, when Obama wanted to kick the Taliban over,” he said.

When Omar died in April 2013, Mansour and a few other Taliban members met at his deathbed to choose a successor, Mojda said. The decision had to be made before burying Omar, he said, so not all members of the shura, or advisory council, were invited. Those in attendance chose Mansour, but they also decided to keep both Omar’s death and the change in leadership a secret, Mojda said.

For two years, Mansour allegedly issued announcements in Omar’s name, including some related to a Taliban political office in Qatar that engaged in secret peace talks with U.S. officials. The Taliban was engaged in peace talks last July when news broke that Omar was long dead. The talks foundered as some Taliban members accused Mansour of usurping the throne.

“He led a coup against the leadership,” Niazi said. “They say Mullah Omar was sick and he died as a result of that illness, but it’s most likely that he was poisoned.”

Other Taliban leaders also defected, with a few joining the Islamic State’s growing movement. By and large, however, Mansour has kept his movement together, according to a Taliban member who spoke on the condition of anonymity because of the danger in talking about the group to outsiders.

“Mullah Mansour has faced serious challenges as the field commanders and fighters asked questions why Mullah Omar’s death news was kept secret from them for two years,” he said. “Some commanders publicly raised the issue and expressed suspicion over his alleged role, but he overcame the leadership crisis, and most of his critics accepted him as the leader of the movement.”

Mansour silenced some critics by paying them off with money or powerful positions, analysts say. Others were killed.

As his forces made advances last year, Mansour alternated between stridency and openness to peace talks. On Saturday, the Taliban released a cagily worded statement, saying that “jihad in Afghanistan is a legal right of Afghans, because our country is under the U.S. occupation,” yet “political efforts are also underway.”

No Taliban members are expected to attend Monday’s meeting, but Ruttig said he sees signs that the group under Mansour is ready to share power. “I think the Taliban has learned,” he said. “They have become more adaptable to the outside world and more responsive to what other Afghans think.”

He warned against calling Mansour a moderate, however.

“The Taliban is a pretty violent movement,” he said. “But we need to think about the conflict in Afghanistan and if there is a way to break out of that vicious circle going back to almost 40 years. If you have an adversary who is willing to talk, you should use that.”