You are here: Home / MidEastGulf / The new Peshmerga Brigades: 9,000 soldiers will be trained and armed by the US 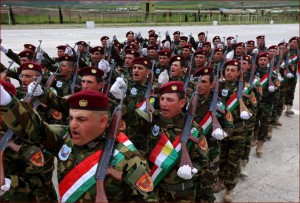 The United States is to cooperate with the Kurdistan Region’s Peshmerga Ministry to establish three new brigades. Washington has committed to training and arming the fresh brigades to assist in the ongoing fight against Islamic State (IS).

A senior Peshmerga official told BasNews that the US plan to train 9,000 Peshmerga. “The US says that the Kurds and Sunnis share of the arms will be sent via Baghdad.”

Member of the Parliamentary Committee for Peshmerga Affairs Qadr Watman told BasNews that the Ministry is working on the plan and will soon announce the conditions for those who wish to join up as Peshmerga.

He added, “Once the forces are recruited, commanders will manage the brigades which will receive military training courses from the US experts.”

Commenting on the Iraqi government’s commitment to share the international military support with the KRG, Kurdish Member of the Iraqi Parliament Shakhawan Abdullah pointed out that Baghdad has so far failed in the process, in which the Peshmerga are meant to receive 35% of arms sent through the Iraqi capital.

“We are closely overseeing the process in order to push Baghdad to send the KRG’s share of the arms,” Abdullah said.

Peshmerga Ministry Spokesperson Jabar Yawar has said that once the weapons arrive in Iraq, a KRG delegation will be deployed to Baghdad to claim its share.