You are here: Home / Analysis / The myth of Saddam’s ghost in Islamic state 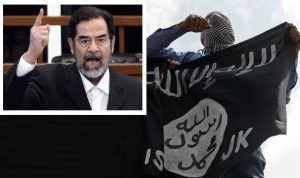 The presence of members of former Iraq dictator Saddam Hussein’s Ba’ath party in the Islamic State has become a staple in “almost every serious analysis of the group”. Craig Whiteside, a fellow at the International Centre for Counter-Terrorism, dispels this myth in a recent paper

Not Ba’athists, they’re Salafis
The US decision to disband the Iraqi Army after the 2003 invasion has often been blamed for the rise of the IS. Those who claim the IS is not religiously inspired use the Saddam angle to claim the group is more interested in power than Islamic ideology

While the IS’s forebears “recruited capable (and religiously acceptable) individuals with military experience from 2003-2006, these people were Salafis first,” Whiteside points out. One reason it expanded so quickly was the presence of an underground Salafi community in Iraq, he adds

Saudi Arabia promoted Salafi thought by flooding Iraq with Salafi literature during the rapprochement between Baghdad and Riyadh because of the Iraq-Iran war in the 1980s. At a time when many religious books, Sunni and Shia alike, were banned in Iraq, government censors turned a blind eye to the distribution of Salafi books Nasr Salem in the Crescent International

Many cases of mistaken identities
Top jihadists were misidentified as ex-Ba’athists. “The entire spy sector of IS is headed by Abu Ali al-Anbari, an ex-Saddam operative,” claims the book ISIS: Inside the Army of Terror. This mistake was repeated in hundreds of articles, though he was a “career Salafist”