You are here: Home / Senza categoria / The Muslim world needs a Peace Corps 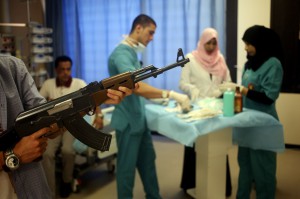 This week’s revelation by FBI director James Comey that fewer Americans are now traveling abroad to join terror group ISIL will give US security agencies some quiet satisfaction, but it will not greatly trouble the bloody organization overrunning swathes of Iraq and Syria.

According to the office of the US Director of National Intelligence, Americans never made up more than “a few dozen” of the 25,000 fighters now thought to have pledged allegiance to the group, which is also known as ISIS, or the Islamic State. Most foreign ISIL fighters come from over 100 other countries—and although the recruits who come from Western nations tend to get the most attention (and raise the greatest alarm) in Western media, the overwhelming majority of jihadists come from Muslim countries.
There’s plenty of concern in those countries, as families, religious leaders, and governments struggle to understand why so many young men—and not a few young women—are signing up for an abhorrent cause. And while many reasons exist, one is that ISIL’s mission is a cause, at least in the minds of the young recruits.
Researchers say that ISIL appeals to new recruits with a sense of greater purpose, often described as belonging to something special, or the opportunity to help people—especially fellow Muslims in need. It has also been suggested that many who are drawn to Syria, Iraq and Libya have “the activist mentality.”
The instinct to belong, to help and to serve a cause is universal, and, for the most part, laudable. Societies have long recognized that young people need ways to focus their idealism and energy, as well satisfy their hunger for new experiences, and to travel. If the Muslim world can harness all those youthful impulses for the greater good of their communities, it would help undermine the attraction of extremist groups like ISIS.

In other words, the Muslim world needs a Peace Corps.

For those unfamiliar with the Peace Corps, it is a US government program that sends volunteers—most of them young men and women—around the world, typically to help poor and distressed communities. Created by president John F, Kennedy, the Corps provides recruits with three months of training, and then gives them two-year assignments, in fields ranging from education and agriculture to business and information technology. Volunteers get housing, benefits, insurance, and a stipend—enough to live reasonably well in the community their serving. Nearly 200,000 Americans have served in the Corps, in 140 countries; nearly 7,000 are currently serving in 68 nations, and applications from volunteers continue to pour in.

There have been several efforts to create such a corps in the Muslim world, some mirroring the American version, and others seeking new models, like Turkey’s Gullen movement. Most have have had specific, restricted objectives—interfaith cooperation, Islamic education. Some have been hampered by the fact that they are backed by well-meaning individuals or small organizations, rather than large institutions. And many are based in the US or Europe, which limits their credibility as well as their reach.

The Peace Corps works because it is backed by the power of the American government, with vast resources (a budget of more than $350 million a year), infrastructure, and support networks, including hundreds of embassies and consulates around the world. But there is a strong international organization that could be the power behind a credible a Muslim Peace Corps: the Organization of the Islamic Conference, or the OIC.

Created in 1969 to build solidarity among Muslim nations, the OIC has 57 member states—among international organizations, only the United Nations has more—and has offices around the world. Unlike the UN, though, its budget is modest, reportedly less than $20 million. It has never progressed beyond being a talking shop, because it is neither a religious organization nor a multilateral governmental institution. It holds a lot of meetings, but lacks the mandate and means to get anything done. At last month’s UN General Assembly, for instance, the organization sought to draw attention to the plight of Muslim Rohingyas in Burma, who are being persecuted by Buddhist groups and ignored by the government. You didn’t hear about it? Well, exactly.

In the aftermath of the terrorist attacks of 9/11, hopes were raised that the organization could help the Muslim world combat extremism in its midst; at a 2005 summit, the OIC adopted a 10-year plan to do just that. But as usual, it has done not much more than hold meetings and issue statements. While it has tried to fight extremism by promoting mainstream Islamic views and scholarship, its influence is limited by the fact that it is not a religious authority.

The OIC could use a new mission. The Muslim world could use an organization dedicated to combatting the extremist ideologies that lead its youth to the path of violence. And young Muslims could use a good cause—one that channels their energy, enthusiasm, and “activist mentality” into positive areas.
Where to start

What would it take to create a Muslim Peace Corps?

For a start, the OIC’s mandate would have to be changed to make it a more active—and activist—organization. Then, there’s the matter of money: it would take tens of millions of dollars to set up the infrastructure, and an annual budget of much more than that. The task of raising the cash should fall to oil-rich Muslim states—many of which are currently under fierce criticism for not doing enough to help Syrian refugees. (For obvious political reasons, it is probably best for non-Muslim states and organizations to play no part at all.)

OIC’s poorer member-states could identify projects that need volunteers: Bangladesh might want help to build schools, say, whereas Niger might need staff for medical clinics. The projects should be scrupulously apolitical, and ideally have no religious aspect—building mosques should not be the job of the Muslim Peace Corps, except when there’s been a natural disaster, and repairing a mosque might be necessary to create a center for relief activities.

The OIC’s job would be to create and run training centers across the Muslim world, where volunteers can be taught skills that they will need for their missions—just as the US Peace Corps does. These centers can also serve as placement agencies, helping volunteers, upon completion of their service, find jobs.

The attractions of a Muslim Peace Corps are pretty self-evident. A young, unemployed Egyptian, for instance, would likely welcome the chance to acquire specialist skills, to travel to a foreign country, and to serve fellow Muslims for a couple of years. The experience would not only be uplifting, it would make the Egyptian much more employable upon their return home.

Creating a Muslim Peace Corps—maybe call it the Ummah Corps, after the Arabic word for the global Muslim ‘community’—will not be easy, swift or cheap. But as more and more young people are drawn to the blood-stained battlefields of Iraq and Syria, there’s an urgent need to give them a cause they don’t need to kill—or die—for.