You are here: Home / Senza categoria / The Muslim Brotherhood, what defines a terror organization? 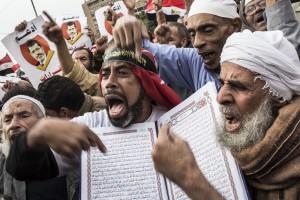 In the halls of power of both the United States and the United Kingdom, renewed discussions have been taking place over the status of the organization known as the Muslim Brotherhood.

In Washington, Senator Ted Cruz (R-Texas), a candidate for the Republican nomination for president, has offered legislation that would ban the group; while in London, following a visit by Egyptian President Abdel Fatteh Al-Sissi, Prime Minister David Cameron announced that a government review into the group would be published.

Despite these efforts and a considerable amount of popular agreement, neither of the governments lists the Muslim Brotherhood on its respective roll of foreign terrorist organizations and many analysts who are adamant in their assessment that the Brotherhood fails to meets the criteria for a terrorist organization argue political expediency is the cause for the governments’ positions.

The Muslim Brotherhood is a Sunni Islamic organization formed in 1928 in Egypt. The group combines politics, religious observance and charitable welfare work and seeks to bring about a Muslim “caliphate,” a state ruled by its strict interpretation of sharia [Islamic law]. In the group’s origins, traces of terrorist ideology can be found, Shehab Wagih, spokesperson for the Free Egyptians Party, told The Media Line. “Sayyid Qutb was one of their main ideologues. His aim was to achieve an Islamic state and an Islamic change would require violence,” Wagih said.

Qutb was an Egyptian intellectual executed by the government in 1966 for alleged links to a plot to assassinate then President Gamal Abdel Nasser. His writings focused on the political and social role of Islam in the modern world and were also highly critical of American culture which he viewed as hedonistic and corrosive. For much of its history, during the years of secularist dictators in Egypt, the Muslim Brotherhood was banned in its home country. This changed briefly following the so-called “Arab Spring” in 2011, after the overthrow of long-time President Hosni Mubarak and the subsequent election of the Muslim Brotherhood’s own leader, Mohammed Morsi.

The first and only democratically elected head of state, Morsi’s selection was a watershed moment for the organization which had for years lurked in the shadows of Egyptian politics, but never rose to power. Within a year of Morsi taking office widespread protests against his policies – which were seen as overtly Islamist and abusive to human rights — brought the country to a standstill. Subsequently, the army stepped in and placed its head, Gen. Al-Sissi, in power. He subsequently became the next elected president.

With Sissi at the helm, a harsh crackdown against the Brotherhood ensued, in which hundreds of Egyptians were killed, thousands arrested and many sentenced to death in mass-trials. Yet, the Brotherhood did not resort to calls for violence, Haytham Mouzahem, head of the Beirut Center for Middle East Studies, told The Media Line. The Muslim Brotherhood has always maintained its practice of abiding by the “democratic process and the civil peaceful means as the means for changing the regime or the laws or the policies of the state,” Mouzahem said.

Although a number of violent individuals — Al-Qa’ida leader Ayman Zawahiri, for instance — have emerged through the ranks of the Muslim Brotherhood, acts of terrorism attributed to them were always committed after their time with the group ended, Mouzahem argued. This is no absolution for Shehab Wagih, who argues that it is the Muslim Brotherhood’s ideology which brings about the violent actions. “Many incidents were performed by Muslim Brotherhood members but the official organization does not admit this,” Wagih insisted.

Analysts have pointed to the Brotherhood affiliate in Tunisia, Ennahda, which lost an election in 2014 and relinquished power peacefully, as evidence of the movement’s commitment to peaceful politics. “In the last decade, the Muslim Brotherhood has developed its discourse and accepted the democratic process and results and said it aims to establish a civil state, not an Islamic state,” Mouzahem said in defense of the group.

But connections to foreign Islamist groups are often presented as evidence of the Muslim Brotherhood’s ties to terrorism. The Palestinian organization Hamas, which controls the Gaza Strip, was founded as a branch of the Brotherhood and is branded by both Israel and the US as a terrorist organization. Yet, the Brotherhood also has connections to democratic parties in Tunisia, Jordan and Turkey. “Any definition of terrorism requires the use of violence or the threat of the use of violence in pursuit of political aims,” Andrea Teti, of the department of Politics & International Relations at the University of Aberdeen, told The Media Line. “There is no evidence that the Brotherhood has called for or used violence for political ends,” Teti explained, adding that for this reason he believed the group should not be designated a terrorist organization.

Notwithstanding such arguments, the debate over how the Muslim Brotherhood should be viewed continues in both the US and UK. British Prime Minister Cameron signaled that although his government would not ban the Brotherhood, it would increase scrutiny of its actions, a policy viewed by many as a gesture of cooperation to those Middle East nations – including Saudi Arabia, the United Arab Emirates (UAE), Syria and Egypt — that have banned the Brotherhood or list it as a terrorist organization.

Such designations are fluid and can change to suit a country’s interests, Jasmine Gani, of the School of International Relations at St. Andrews University, told The Media Line. “The term ‘terrorist’ has become a political tool, conferred on groups that are deemed to go against a country’s interests; and at the same time it can be lifted at any time if the interests or political conditions change,” Gani explained. “It somewhat undermines the utility of the term ‘terrorist,’” she concluded.