You are here: Home / Analysis / The mole inside the Hezbollah tunnel 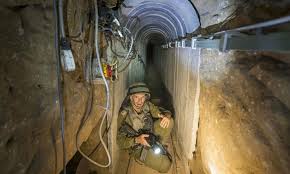 This week, for the first time, Israel made public its discovery of the tunnel constructed by Hezbollah and reaching into Israel’s sovereign territory. This brought to an end a long period during which a large number of Israelis living in communities adjacent to the Lebanese border reported hearing sounds of digging as well as feeling tremors in the walls of their homes, like reported by inn.com.

Attack tunnels are intended to allow for significant numbers of armed infantry bearing weapons, artillery and supplies, to traverse them within a minimal time span, avoiding Israeli lookouts and thereby gaining the element of surprise. An underground passage grants attackers protection from Israeli bombs, while it also means that the war begins on the Israeli side of the border, in the midst of areas populated by civilians. That fact allows for sudden forays and kidnapping.

However, the discovery and neutralization of the tunnel that Hezbollah dug into Israel’s sovereign territory is a technological, operational and intelligence network accomplishment, for additional reasons:

1. Hezbollah based its plans for future wars on these tunnels. Nasrallah has not made a secret of his plans to take over the Galilee in the next war, but because Hezbollah has no means of air transport, it cannot land sufficient numbers of armed forces in Israeli territory, and the tunnels were intended as the substitute for an airlift.  By discovering the first tunnel, Israel has eliminated the immediate use of this strategic method, but the IDF believes there are additional tunnels.

2. The discovery of the tunnel has proven to the entire world that Hezbollah is acting in flagrant violation of the Security Council Resolution 1701 which brought the 2006 Second Lebanon War to an end. This resolution forbids Hezbollah any presence in southern Lebanon, but now it has become clear that not only is the terrorist organization in that region, it is also violating Israeli sovereignty. It is obvious once again that UNIFIL has neither the ability nor the interest to carry out the mission it was given by the Security Council and Israel has no reason to assume that the international community will act to ensure its security. This violation of a Security Council decision provides Israel with justification, vis a vis the Israeli public and the world, to attack Hezbollah.

3, Israel has the technological ability to discover tunnels dug as deep as 25 meters (27 yards) down into bedrock, a depth equal to the height of an 8 storey building. And Israeli know-how does not end with the discovery of the tunnel: despite the fact that the tunnel reaches only 40 meters (43 yards) into Israel, Israel managed not only to discover it but to position both a camera and explosive charge inside it without Hezbollah lookouts becoming aware of any activity in the tunnel.

4. Hezbollah suspects that Israel succeeded in finding the tunnel by means of intelligence activity, meaning that there is a “mole” within its ranks, someone with access to its most secret information – the location of its tunnels – who is on such a high level of collaboration with Israel that he can provide it with the relevant information without being exposed.  IDF CoS Gadi Eizenkot said on Tuesday that Israel is in possession of Hezbollah’s tunnel plans.

In my opinion, from the minute the tunnel’s discovery was made public, internal Hezbollah security forces are working feverishly to discover who the collaborator is. People are being interrogated, an insulting experience in itself that does not make for a pleasant atmosphere. Tension is at a high between members of the organization who had information about the tunnel, as each and every one of them automatically is suspected of working with Israel. Fearing that anyone can be the “mole”, people are refraining from sharing information with one another.

This situation is affecting the organization’s functioning and opens up the possibility that the innocent will find themselves accused. Those falsely accused will not continue as if nothing untoward has happened after they have been suspected of disloyalty, an unforgivable insult to their dedication. No organization can function in a situation of this kind, especially in a case where the organization’s entire strategy has to be altered due to fears that Israel has found other tunnels and booby-trapped them as it did the first.

5. Up until Wednesday morning, the time these lines were written, there has been no reaction from Hezbollah. In my opinion, the organization is in a state of utter disarray, with Hassan Nasrallah expected to explain how this debacle occurred. The Iranians are furious because of Nasrallah’s failure to adequately develop the tunnel strategy and because of the suspicion that there is a Hezbollah member passing on information to Israel.

6. Hezbollahs’ “Radwan” commando unit is the attack force which was to traverse the tunnels, enter the Galilee and conquer Israeli settlements there. Now that the tunnel has been found and booby-trapped by the IDF, both officers and fighters in the “Radwan” unit are afraid that every tunnel they enter is a death trap – not exactly adding to their motivation.

7. The discovery of the tunnel will cause Hezbollah to concentrate on developing its rocket arsenal and especially on honing its ability to pinpoint targets in Israel.

8. The tunnel project cost Hezbollah many millions of dollars, and now all that investment has gone to waste. Hassan Nasrallah is going to have to explain the financial aspect of this failure as well.

9. Despite all this, Israel would be wise not to think that the discovery of the tunnels is a knock-out blow to Hezbollah. That terror organization knows how to overcome difficulties and adapt itself and its operations to changing circumstances. While it is true that the discovery of the tunnel is an impressive achievement, technologically and intelligence-wise, it is not enough to defeat Hezbollah and convince the organization that there is no point in continuing to fight Israel. Hezbollah will remain Israel’s implacable and bitter enemy from an ideological standpoint, and more immediately, because it is the long arm of the Iranian Islamic Republic which has sworn to destroy Israel.