You are here: Home / Africa / The military coup in Burkina Faso 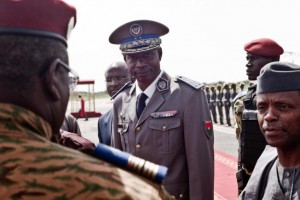 The general condemnation which trailed last week’s military coup in Burkina Faso is a clear indication that coup d’etat is no longer acceptable in any part of the world as a means of ascending power. The Burkinabe presidential guard headed by Gilbert Diendéré had ousted interim President Michel Kafando, barely one month away from the country’s general elections. But fortunately, the coup collapsed few days after and Kafando was reinstated.

It is commendable that the Burkinabe Army chiefs are totally supporting the country’s transitional government, which was dissolved by the insurgents. It is also inspiring that Burkinabes themselves have risen swiftly against the coup the same way they did last year when President Blaise Compaore wanted to extend his infamous 27- year-old rule. Protesters had gathered in the streets in large numbers and forced Compaoré to flee into exile in Côte d’Ivoire. It is sad that innocent people are, these days, still losing their lives in a senseless coup staged by rabid power drunks. At least 10 people have reportedly died and over 100 injured in clashes, which erupted after the ignominious uprising of last week in the country.

When Lt. Colonel Isaac Zida overthrew the rejected regime of Compaore in October last year, he served briefly as head of state before selecting Michel Kafando as the new President. Then, Kafando appointed Zida as acting Prime Minister. However, it was when the beleaguered country was gradually settling down and preparing for elections that Diendere and his men struck. The coup is despicable in its entirety and it is a slap on the faces of Burkinabes whose minds were set on democracy.

Nevertheless, it is gratifying that world powers have joined in condemning the coup. The United States has noted that any attempt to seize power through extra-constitutional means or resolve internal political disagreements through force, is unacceptable. The UN secretary general, Ban Ki-moon, has also condemned the coup which came less than a month before a crucial election to complete the transition to democracy in the country. In a joint statement, the United Nations, African Union and the Economic Community of West African States, have demanded the immediate and unconditional release of the interim President, Prime Minister and all government officials being held hostage by the coup plotters.

It is high-time African soldiers came to terms with the stark reality that coups are no longer fashionable the world over. It is shameful that in the last five years, long after democracy has almost become the anthem of most continents in the world, Africa is still reckoning coup d’etats in drove. In  2010, Salou Djibo overthrew Mamadou Tandja in Niger Republic, and in 2011, Mohamed Hussein Tantawi deposed Hosni Mubarak in Egypt, while the Tunisian Revolution also overthrew Zine El Abidine Ben Ali in Tunisia. There were also military coups in Guinea Bissau and Mali in 2012 and in 2013, Michel Djotodia overthrew François Bozizé in Central African Republic while Abdel Fattah el-Sisi overthrew president Mohamed Morsi in Egypt. In the same year in the Republic of Benin, there was a coup attempt by Colonel Pamphile Zomahoun against President Thomas Boni Yayi while Abdel Fattah el-Sisi succeeded in overthrowing President Mohamed Morsi in Egypt.

This is a ridiculous development and we demand in strong terms that these ambitious soldiers should stop embarrassing Africans. If they desire power, they should seek it through constitutional means and not through this roguish and disgraceful trick of gun wielding. They need to hear the sweet song of democracy, which now reverberates across the world, and impulsively dance to it.