You are here: Home / Africa / The militants fight back: First it was Somalia’s Shabaab, now Boko Haram recaptures key town in Nigeria 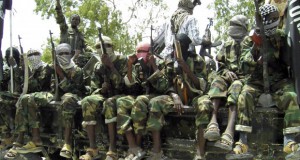 “It is sad as we have been made to understand that Marte has today completely fallen under the control of the insurgents, which to us is a very huge setback,” said Mustapha Zannah, vice governor of the Borno state.

The recapture would cap a week of fight backs by jihadist groups, thought to be in decline, on the continent.

On Friday Somalia’s Al-Shabaab fighters armed with machine-guns and rocket-propelled grenades attacked two towns in Somalia’s Lower Shabelle region, culminating in the capture of the two neighbouring districts of Awdhegle and Mubarak, witnesses and combatants said.

An unidentified al-Shabaab commander told Radio Andalus, a Somali broadcaster that supports the militants, that they killed at least 10 government troops.

The al-Qaeda-linked group has been in retreat in the Horn of Africa nation since its fighters were forced to withdraw from the capital, Mogadishu, in August 2011 after a series of military defeats. Al-Shabaab still controls swathes of territory and stages deadly gun and bomb attacks.

The town, located along a strategic trading route between Nigeria and neighbouring Cameroon and Chad, has traded hands between the jihadists and government troops numerous times since 2013.

And in Egypt, gunmen killed two judges and a prosecutor Saturday in the Sinai Peninsula, where security forces are battling an Islamist insurgency spearheaded by an Islamic State group affiliate, officials said.

The Boko Haram attack comes as a regional military coalition of Nigeria, Niger, Chad and Cameroon has claimed a series of major victories against the militants since launching sweeping offensives against the jihadists in February.

But the Islamist fighters, who recently pledged allegiance to the Islamic State extremists who have captured swathes of Iraq and Syria, have been pushing back.

The jihadists killed at least 55 people in two raids on villages near Maiduguri, the first assault on the northern city in three months.

“Even if 90% of our communities have been liberated, the war is not yet over,” Zannah cautioned early on Saturday.