You are here: Home / MidEastGulf / The Middle East′s cold war 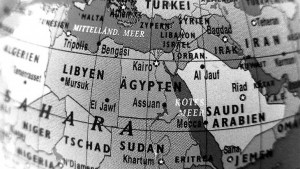 The breach in diplomatic relations between Iran and Saudi Arabia is a dangerous watershed in an already unstable, war-torn region. The rupture has its roots in a strategic rivalry that stretches across the Middle East, says Bernard Haykel, Middle East expert at Princeton University

The tensions between Saudi Arabia and Iran go back many decades, but they became especially acute after Iran′s Islamic Revolution in 1979. The revolution′s leader, Ayatollah Ruhollah Khomeini, did not hide his contempt for the Saudi royal family; he quickly positioned Iran as a champion of ″the oppressed″ against ″the forces of arrogance″ – the United States and its local allies, Saudi Arabia and Israel.

But while the rivalry has sectarian and ideological components, it is, above all, a pragmatic dispute over regional interests. Because Iran views the political order in the Arab world as serving its enemies′ interests, it has continuously sought to upend it, promoting terrorist groups and deploying proxies in order to establish and expand its influence in the region.

The non-state actors Iran has supported include rioting pilgrims in Mecca, suicide bombers in Lebanon and Hezbollah militants, who have launched attacks on Israel and, more recently, battled Saudi-backed rebel groups in Syria.

Until the turn of the century, Saudi Arabia′s response was tepid; it sought to establish its Islamic legitimacy through strict enforcement of the religion′s dictates at home and support for Muslim liberation causes abroad, most notably in Afghanistan and Bosnia. But in recent decades, the cold war between the two regional powers has heated up.

After the 2003 invasion of Iraq led to the formation of a Shia-dominated government in Baghdad, Saudi Arabia′s rulers watched in alarm as Iran extended its influence across the Middle East. In 2006, Hezbollah fought Israel to a standstill in Lebanon. Then, in 2014, Shia Houthi rebels – another Iranian proxy group – conquered the capital of Yemen. In the royal palaces in Riyadh, the prospect of Iranian-backed uprisings in Bahrain – or in Saudi Arabia itself – began to look alarmingly plausible.

Things came to a head in 2015, when the US and the other five permanent members of the UN Security Council (plus Germany) reached a nuclear accord with Iran, agreeing to lift economic sanctions while allowing the country to maintain its regional influence. With Iranian allies or proxies operating in Syria, Iraq, Lebanon and Yemen, Saudi Arabia′s leaders have felt increasingly surrounded. Since Salman bin Abdulaziz Al Saud′s accession to the throne in January 2015, the kingdom′s principal strategic aim has been to roll back Iran′s influence – with or without US help.

The rivalry′s principal battlegrounds are Syria and Yemen. In Syria, Saudi Arabia has dedicated itself to the overthrow of President Bashar al-Assad, a key Iranian ally and has worked to unite the woefully disorganised opposition groups. Iran, for its part, continues to back Assad, with the help of Russia. The war has turned into a quagmire. With no side able to gain the upper hand, the violence is likely to continue. A recent US-led effort to broker a peace deal in Lebanon, carried out in the hope that this could lead to a breakthrough in Syria, fell victim to the distrust between the two countries.

The proposed power-sharing agreement would have replaced Assad with one of his allies and installed a long-time Saudi client as Prime Minister. But while the Saudis appeared willing to accept the deal, Iran rejected it after Hezbollah balked at both candidates.

In Yemen, Saudi Arabia and its Sunni allies launched a military campaign in March 2015 that quickly ground down into another stalemate. Pro-Iranian Houthi fighters and forces loyal to former President Ali Saleh have fought off a force of southern Yemenis backed by Saudi and Emirati air power and special forces.

Negotiations to resolve the conflict have collapsed. In the absence of a full-scale invasion – which is not likely, given the potential for large-scale casualties – the war will almost certainly drag on.

Part of a comprehensive campaign against the Saudi opposition

Saudi Arabia′s execution of al-Nimr was part of a broader crackdown on domestic opposition; the sheikh was one of 47 people executed on charges of terrorism, all but four of them Sunni militants accused of supporting al-Qaida.

The reaction of Iran and its supporters – with violent anti-Saudi protests not only in Tehran, where the kingdom′s embassy was sacked, but also in Iraq and Bahrain – merely revealed the full depth of the underlying bilateral enmity.

In the short term, Iran′s response has benefited Saudi Arabia′s rulers, rallying Sunnis both within the kingdom and abroad and silencing their jihadist opponents. But without some external intervention to bring the two countries to the bargaining table, their rivalry will derail efforts to stabilise the Middle East and could lead to spillover and escalation, making a bad regional environment much worse.