You are here: Home / Africa / The looming threat of Islamic State in Sudan 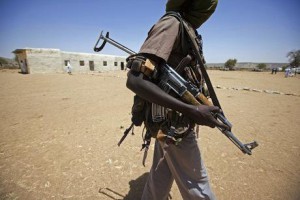 The news about Sudanese students who fled to Syria via Turkey in March went viral and shocked many in Sudan and beyond. These young students, from Khartoum’s upper middle class, are believed to have entered Syria illegally and are currently volunteering as medics in ISIS strongholds. Five of them are students at one of Sudan’s most expensive higher education institutions, the University of Medical Sciences and Technology (UMST).

Their departure from Khartoum to Turkey would have been noticed had it not been for their foreign passports, as Sudanese immigration law requires exit visas for Sudanese travelling abroad, stating their reason for travel, and on the Turkish side, borders are open only for western passport bearers.

One of the fugitives stated on twitter, “we are a big group here, we are safe, and everything is OK”; when asked to contact his heartbroken mother, his reply summed up their mission: “we are here for the sake of Allah”.

Although the real motive for the students’ travel to an ISIS stronghold has yet to be proven, from a Sudanese perspective their story has refocused attention on the fragile state of the country and the looming threat of the growing ISIS recruitment machine.

This event has also highlighted how Sudan continues to evolve as a centralised entity, where such events receive condemnation only when they strike the central chord. Sudanese delude themselves if they believe that this incident is isolated, because it was not the first.

Above all, Sudan’s lack of democratic governance, ISIS’s effective style of decentralised leadership, and the aggressive political and religious stance currently prevailing in Islamic discourse, underpin ISIS’s ability to recruit Sudanese youth. The last two points feed the central thrust of this article, as democracy in Sudan is an on-going debate.

Fundamental Islamist groups have for some time been a threat to the conservative and moderate version of Islam in Sudan; however ISIS’s penetration presents a particular quandary for Sudanese society as it targets youth.

Recently the country has had many extreme attacks. The rise of political Islam began in 1989, and during the 1990s Sudan provided a safe haven for radical Islamist groups, hosting Osama Bin Laden and his ‘Afghan Arabs’ groups.

In December 2012, the Sudanese security forces attacked a fundamentalist training camp in the remote area of al-Dindir national park in the south-eastern state of Sennar. More than a dozen militants were killed and more than twenty arrested. The governor of Sennar, Ahmed Abbas, said that those who were arrested were university students and their leader a university teacher.

Later it was established that the group members and their leader had been previously arrested in 2007, when the government foiled a terrorist plot by what later became known as the Salma explosions group in southern Khartoum.

Both groups have direct links with the killing of John Granville, the American USAID employee and his Sudanese driver Abelrahman Abbas, in Khartoum on 1 January 2008. The killers were sentenced to death but they managed to escape, raising suspicions of inside help.

In January 2013 al-Qaeda in Sudan announced the birth of their student wing in the University of Khartoum, in a new sign of growing extremist influence on young students.

When France commenced its military campaigns in northern Mali in October 2012, several pro-radical Islamist websites rejoiced at the arrival of 150 Sudanese mujahedeen. The involvement of Sudanese jihadis was corroborated when in February 2013, a French airstrike in Mali confirmed the death of the Sudanese veteran jihadi leader known as Abu Hazim—allegedly the head of al-Qaeda in Sudan.

In his company was Ahmed Hassan Osman, known as ‘al-Barlom’, a term given to students in their first year of university. Al-Barlom later died in another French strike in Mali. According to reports, the Sudanese jihadis in Mali were mostly young people and included two students from the UMST, one of them allegedly the missing Osman Fagiri.

In mid-2014, the Sudanese cleric Mohamed Abdullah al-Jazouli expressed his full support for ISIS from the podium of his mosque in the Taif neighbourhood in Khartoum. Al-Jazouli was arrested by Sudanese security forces a couple of times for the extreme messages he spread.

On 7 May 2014, the Sudanese ISIS jihadist figure Mazin Abdulatif was killed on his 19th birthday in an air strike in Al-Ramadi in Iraq. Mazin, known as Abu al-Baraa al-Muhajir, was considered the youngest jihadi to lead a large faction in Iraq. Mazin spent one year in Syria before he was assigned to lead ISIS campaigns in Iraq. The death of Mazin was deeply mourned in jihadist social media. Mazin’s two older brothers Moayad and Montaser are both detained in Huda prison on charges related to al-Dindir’s activities.

On 14 February, citizens of al-Hasahisa town in al-Gezira state were taken by surprise when engineer Gurashi al-Zain was attacked in an ISIS-inspired attempt to behead him in front of his family. Citizens and security forces were able to capture the assailant and Gurashi al-Zain was rescued.

Recently on 16 March, news spread over social media to confirm the death of Abdullah Mohamed Suleiman Bello in the city of Sarat in Libya. This coincides with the death of another youngster, Abdulsalam Musa, who was fighting with ISIS in Syria and who died near the Latakia boarder.

The political context needs to be considered when trying to understand the spread of Islamism in Sudan. In fact, Sudan was long known for practising a moderate form of Islam, originally spread peacefully through the Sufi movements that first came with Arab migrations in the 15th and 16th centuries.

Traditional religious leaders focusing on the Sufi practice of self-control practised an accommodating version of Islam and succeeded in merging Islamic rituals with African tradition and cultural beliefs.

This religious tolerance gradually started to change with the penetration of Islam into the political life of Sudan, as early as the 1970s; however it was when the Al-Ingaz regime clung to power in 1989 that the political position and discourse of Islam changed.

Younger generations in Sudan raised during the tenure of political Islam have had different political and religious experiences that have promoted radical jihadi language.

For instance, this era ordered the replacement of school uniforms for children from ages 5 to 15 with military uniforms, to brainwash children from an early age into believing in the on-going war the regime was conducting in the southern part of the country, now South Sudan. They were taught that citizens in that part of the country were ‘kufar’, meaning infidels, and that those who fought them were ‘mujahedeen’, the plural of mujahid.

Parallel to the imposition of military uniforms, traditional school names were replaced with Islamic names denoting the prophet Mohamed’s companions. Moreover, after completion of preliminary and secondary school, youth were forced to join a military camp of two to three months, in what was called the Popular Defence Forces (PDF). These camps were a precondition to enrolling in any university. The PDF camps were a locus of radical jihadi discourse and the conscripts fought alongside the Sudanese armed forces in the war with South Sudan.

Furthermore, in the past, districts in Khartoum and other Sudanese towns had open public spaces in each neighbourhood, normally used for social occasions and as playgrounds and sports fields for children. Up to the mid-1990s, each district had its own team, which competed with teams from other neighbourhoods in energetic small leagues called rawabet.

These playgrounds, which provided space and activities for youth, are no longer there. Short-sightedly, local authorities were given the green light to sell them and, hungry for financial resources, they wasted no time in doing so, leaving only a small space in the corner of each yard called al-Zawya meaning ‘the corner’ in Arabic. These zawyas, which are used as small mosques, now proliferate in Khartoum.

Consequently, the youth were conditioned to war and to jihadist language, with TV, radio and other media channels repeatedly reporting on and promoting the ‘holy war’ in South Sudan. The deliberate destruction of locations for public gathering and sporting activity, and the embedding of jihadi language in daily life, sowed dragon teeth in the heart of society. Politically these policies were essential for the Ingaz regime to reinforce its hold on power.

Sudanese youth see only a bleak future for their country, which seems doomed to suffer and struggle. An ill equipped and poor country, with dehumanising social conditions and entrenched disparities and inequalities among citizens, leaves the youth without hope. Economic, social, and above all, political failures provide little hope that Sudan will emerge out of its quagmire.

Out of desperation and frustration the youth have decided to take things into their own hands. In his recent election campaign, the Sudanese president, Omer al-Bashir, who is running for a new five-year presidency term, pledged to implement “clean Sharia” in a Sudan where there is “no place for secularism and its supporters”—proof of the continuation of the same vacuous discourse conducive to extremism.

Desperate political conditions are not the only element influencing the rise of ISIS in Sudan. One additional factor is its widespread network and ability to regenerate, like the hydra with different heads. This organisation has an impressive ability to function loosely, with very little need for formal structure or central leadership. In this case even if the head is cut off, the body will live on.

Recently in Sudan, seven Salafi figures signed a statement by a group called ‘jihadists around the world’ to give bay’ah or allegiance to al-Baghdadi, the leader of ISIS. There is very little affinity and organisational structure or leadership to link these leaders. Their local priorities, approaches and goals are different. Perhaps what they share is fraternal support for each other and what unites them is their distaste for western values in general, particularly western democracy and secularism.

What distinguished ISIS and what has also apparently attracted Sudanese youth is its advocacy of a Caliphate for all Muslim people, rather than the modern nation state with boundaries inherited from western colonialism.

The quick emergence of ISIS has made possible the attainment of the dream of a Muslim Caliphate, at least in the mind of youth. They have provided a unifying operational ideology that calls for re-establishing the Caliphate state with little cohesive need for structure or leadership.

ISIS’s penetration in Sudan is not an exclusively elite phenomenon, even though it surfaced among the elite only when it directly affected them. The problem needs to be solved not by fighting Islamist groups or the heads of these organisations, as their hydra-like nature will generate new heads. The ISIS threat is not rooted in one place in Sudan; even South Sudan is not immune from the grip of ISIS. Its method of attack is not particular; it can strike anywhere, and anytime.

A recent UN report warned that Sudan’s Darfur is a “potentially fertile” jihadist staging ground , and that the Islamist movements in Sudan and in the entire region constitute a substantial risk not only to Sudan. The impact of this militant mindset will not remain limited for long and could soon be directed at the authorities, as it has now started to impact society. The repercussions of this may result in Sudan becoming as anarchic as its surrounding states.

Evidently 15 years of bombing al-Qaeda by the U.S. and its western allies in Afghanistan, Pakistan, Iraq, and presently Syria, have now borne the poisoned fruit ISIS.

Perhaps Sudan needs to learn from this experience and open up a space for discussion. A permanent solution to the problem would be for Sudan to adapt a more democratic policy and allow more freedom in the country.

The tendency to inaction toward potentially militant Islamist groups may backfire, with risky consequences. Islam was not initially imposed in Sudan by sword, but by peaceful interaction between its different communities and migrant population. This legacy must be retained.