You are here: Home / Mediterranean / The Libyan National Army (LNA) claims advances in Garyounis and Gwarsha 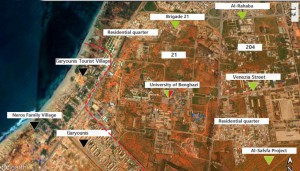 The Libyan National Army (LNA) says that following a new offensive against the Benghazi Revolutionaries’ Shoura Council (BRSC) in south Benghazi launched yesterday, it forced it to pull out of the Benghazi University campus in Garyounis district. It claims that today it took the compound of the animal fodder Al-Safsafa Project in nearby Gwarsha and has now moved to near Venezia Street. Fighting is also taking place today in the Garyounis Family Tourist Village near Gunfudah – like the university, until now held by Ansar.

An LNA source said that, following the offensive, codenamed Buwabat Al-Jahim (“Gate of Hell”), by Saiqa Brigade 21 and Tank Brigade 204, the former had moved onto the university campus but then pulled back because it was too open an area for safety. The campus is now a no-man’s land, the source said, with no one controlling it.

“The [LNA] forces could not stay. They were too exposed. The university space is too open,” the Libya Herald was told.

Although it has not been possible to verify the advances, it is clear that there has been intense fighting in the city in the past 24 hours. Both the Benghazi Medical Centre (BMC) and Jalaa Hospital are reported to be full of soldiers injured in the fighting. The former has received the bodies of seven soldiers killed in fighting and 40 wounded in the past 24 hours. Almost all are said to be from the tank brigade and were killed or injured in Garyounis.

The source added that despite having been under constant siege there and in surrounding areas by the LNA on the north side and Ajdabiya forces to the south west, the BRSC has been receiving substantial reinforcements of men, arms and supplies through the small harbour it holds at Al-Mreisa.

“The Majlis [BRSC] are still there [in Garyounis]. They are a big force”, the source said.

The LNA operation included air strikes, which have continued today. Strikes have also be carried out against BRSC positions in Sabri, Suq Al Hout, Buatni and Leithi where snipers continue to prevent the LNA from moving ahead.

Meanwhile, missiles continue to fall randomly in several areas of the city including Leithi, Tabalino and Rahabah, close to Venezia Street. In Leithi yesterday, a friend of a Libya Herald reporter was killed and two others seriously injured when a missile hit their car. It is not known who fired it.

“Leithi is a cemetery,” said one resident who has refused to leave the area. There were Ansar bodies on the street, he said, and with Ansar snipers operating it was “too dangerous to go out”.

LNA supporters claim, however, that whereas before there was indiscriminate firing of missiles by the BRSC, it is now deliberately targeting some districts in revenge for their refusal to back it. Residents in Buhdeima, Majouri, Tabalino, Garyounis and Rahabah, where 204 Brigade is based, are said to have been warned by the BRSC to leave because the areas would be attacked.

Meanwhile, tensions have emerged between the government and the Benghazi Security Directorate over the appointment of a new boss by the Ministry of Defence.

The officers and men have rejected the replacement of their present chief, Colonel Ramadan Al-Washasi, by Mustafa Al-Ragig.  They have condemned what they said was “political interference” in the security situation. They also demanded that they be given more weapons, ammunition and vehicles.