You are here: Home / Africa / The librarian who saved Timbuktu’s cultural treasures from al Qaeda 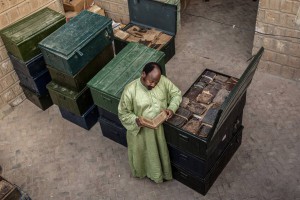 For custodians of the ancient heritage of the Middle East and North Africa, the recent rise of Islamist extremist groups has posed a dire challenge. Since its seizure of the historic Iraqi city of Mosul in early 2014, Islamic State has pillaged and demolished mosques, shrines, churches and other sacred sites across the region. The group continues to launch “cultural cleansing” operations from Tikrit to Tripoli.

In this grim procession, there have been occasional victories for culture over extremism, like the recapture last month of the ancient Syrian city of Palmyra, which may now be restored to something of its previous glory. A less familiar case of cultural rescue features an unlikely hero: a 51-year-old book collector and librarian named Abdel Kader Haidara in the fabled city of Timbuktu, in the West African country of Mali.

The story begins in April 2012, when Mr. Haidara returned home from a business trip to learn that the weak Malian army had collapsed and that nearly 1,000 Islamist fighters from one of al Qaeda’s African affiliates, al Qaeda in the Islamic Maghreb, had occupied his city. He encountered looters, gunfire and black flags flying from government buildings, and he feared that the city’s dozens of libraries and repositories—home to hundreds of thousands of rare Arabic manuscripts—would be pillaged.

The prizes in Mr. Haidara’s own private collection, housed in his Mamma Haidara Commemorative Library, include a tiny, irregularly shaped Quran from the 12th century, written on parchment made from the dried skin of a fish and glittering with illuminated blue Arabic letters and droplets of gold. His collection also boasts many secular volumes: manuscripts about astronomy, poetry, mathematics, occult sciences and medicine, such as a 254-page volume on surgery and elixirs derived from birds, lizards and plants, written in Timbuktu in 1684. “Many of the manuscripts show that Islam is a religion of tolerance,” he told me.

Mr. Haidara knew that many of the works in the city’s repositories were ancient examples of the reasoned discourse and intellectual inquiry that the jihadists, with their intolerance and rigid views of Islam, wanted to destroy. The manuscripts, he thought, would inevitably become a target.

A few days after the jihadist occupation began, Mr. Haidara, who worked full time as a book restorer, archivist and fundraiser, met with his colleagues at the office of the Timbuktu library association, which he had formed 15 years earlier. “I think we need to take out the manuscripts from the big buildings and disperse them around the city to family houses,” he told them, as he recalled the conversation for me two years later. “We don’t want them finding the collections of manuscripts and stealing them or destroying them.”

Months earlier, the Ford Foundation office in Lagos, Nigeria, had given Mr. Haidara a $12,000 grant to study English at Oxford in the fall and winter of 2012. The money had been wired to a savings account. He emailed the foundation and asked for authorization to reallocate the funds to protect the manuscripts from the hands of Timbuktu’s occupiers. The money was released in three days. Mr. Haidara recruited his nephew, and they reached out to archivists, secretaries, Timbuktu tour guides and a half-dozen of Mr. Haidara’s relatives.

The result was a heist worthy of “Ocean’s Eleven.” They bought metal and wooden trunks at a rate of between 50 and 80 a day, made more containers out of oil barrels and located safe houses around the city and beyond. They organized a small army of packers who worked silently in the dark and arranged for the trunks to be carried by donkey to their hiding places.

Over the course of eight months, the operation came to involve hundreds of packers, drivers and couriers. They smuggled the manuscripts out of Timbuktu by road and by river, past jihadist checkpoints and, in government territory, suspicious Malian troops. By the time French troops invaded the north in January 2013, the radicals had managed to destroy only 4,000 of Timbuktu’s nearly 400,000 ancient manuscripts. “If we hadn’t acted,” Mr. Haidara told me later, “I’m almost 100% certain that many, many others would have been burned.”

Mr. Haidara was especially proud of rescuing one manuscript: a crumbling volume about conflict resolution between the kingdoms of Borno and Sokoto in what is now Nigeria, the work of a Sufi holy warrior and intellectual who had briefly ruled Timbuktu in the mid-19th century. This man, Mr. Haidara argued, was a jihadist in the original and best sense of the word: one who struggles against evil ideas, desires and anger in himself and subjugates them to reason and obedience to God’s commands. It was, he thought, a fitting rebuke to all that the militants stood for.