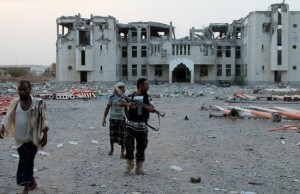 The leader of Yemen’s Iran-backed rebels said a political settlement with the exiled government was still possible after what he called the “short-term” setback of their ouster from second city Aden.

Abdulmalik al-Houthi said the rebels would welcome a new attempt by a third party to broker a deal after the failure of U.N.-brokered peace talks in Geneva in June.

“A political settlement is still possible,” Houthi said in a speech broadcast by the rebels’ Al-Masira television channel late Sunday.

“We would welcome any [mediation] effort by a neutral party – Arab or international,” he said.

Houthi played down the withdrawal of the rebels and their allies from Aden in mid-July after four months of ferocious fighting.

“The advance made by the enemy in Aden will collapse,” he said.

“It is a short-term situation which we will overcome despite all the money of Saudi Arabia.”

Yemen’s oil-rich neighbor has led an air campaign against the rebels since March and has also trained and equipped ground forces that were instrumental in securing Aden.

It was the rebels’ entry into the southern port that forced President Abedrabbo Mansour Hadi and his internationally recognized government into Saudi exile in March.

Riyadh has justified its military intervention against the rebels and their allies, saying that they posed a threat to the kingdom’s security.

But Houthi said that after more than four months of devastating bombing, the threat was the other way round.

“With the crimes that you are committing you pose a danger to Yemen,” he said.

“To guarantee your security, you have to be a good neighbor.”

The rebels have fired mortars, rockets and even Scud missiles across the border but say that they only did so in response to the Saudi-led air war.

A Saudi civilian was killed Sunday but the majority of the 49 deaths so far have been soldiers.