You are here: Home / FakeNews / The last fake news from Sputnik: “Gastronomical genocide in Greece” 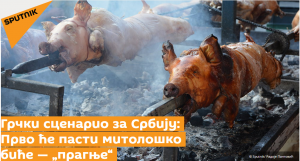 The ‘geniuses’ from the European Parliament and the European Commission are seriously considering banning both gyros and kebabs in the country which is called ‘the cradle of civilisation’, the Serbian edition of Sputnik wrote in an article dubbed ‘The Greek scenario for Serbia’, like reported by euvsdisinfo.eu.

Serbia should hence consider well whether it will enter into marriage with the EU out of love or out of interest.

In any case, Sputnik writes, it would be as if a victim marries his or her rapist, since the oriental influences in the Serbian cuisine originate from Greece, which is now threatened by a ‘gastronomic genocide’.

Genocide is a recurring theme in the pro-Kremlin media; most recently recognised in its ‘linguistic’ form in Latvia, but seldom does it correspond to its actual definition.

This is not the first time that pro-Kremlin disinformation outlets develop this type of claim. In 2016, traditional European cuisine was described to be ‘under attack of Muslim citizens’.

Of course, the EU is not banning kebabs. The disinformation was spread as the European Parliament’s Health Committee raised concerns about the impacts of phosphates that are used as food additives.

It is also hard to see why Serbia would be suffering from Stockholm syndrome as a victim of an EU rapist, as Sputnik suggested. Serbia has stated that its strategic goal is EU accession, and Serbia is guaranteed the status of an EU candidate country.