You are here: Home / Europe / The Islamist war against Sikhs is arriving in Europe 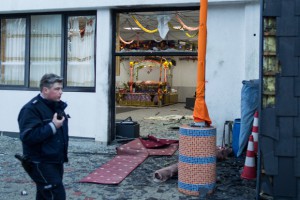 Terror attacks in Germany are becoming remarkably unremarkable. So when a bomb went off in the German city of Essen, near Düsseldorf – and killed nobody – it barely registered. The three teenagers who detonated the device were all members of a Whatsapp group called ‘Supporters of the Islamic Caliphate’, so their intentions seemed pretty clear: they wanted to wage war against the infidels of the West.

But their target – a Sikh temple – was striking. While initial reports suggested there was ‘no indication’ of a terrorist incident, any Sikh reading the news would have understood the motive, just as any Jew or Christian would have understood precisely why Islamic extremists target synagogues or churches. It was a religiously motivated attack, designed to remind Germany’s Sikh community that they should also be fearful.

It’s a common claim that Christian persecution at the hands of Islamic fundamentalists is overlooked. But after the murder of the French priest Father Jacques Hamel in Rouen earlier this month, it’s hard to brush aside the fact that Europe is becoming a religious battleground. The persecution meted out by Islamic State to many minorities in Syria and Iraq is arriving on our shores – and it is a gruesome spectacle. Jews and Christians have felt the brunt, but the Essen bomb was a reminder that Sikhs are also facing up to the menace of Islamic extremism.

Sikhs and Muslims have a long, tumultuous history. The founder of Sikhism, Guru Nanak was a peaceful man who engaged in interfaith dialogue. He campaigned for women’s rights, opposed caste discrimination, and spoke up against atrocities committed by the Mughals, India’s Muslim invaders. Nanak’s followers came from both Muslim and Hindu backgrounds. But history took a turn when Guru Tegh Bahadur, the ninth Sikh guru, was executed in 1675 for challenging an Islamic policy of forced conversion of Hindu priests. Foreseeing the difficulties ahead, his son Guru Gobind Singh decreed that Sikhs (who he called the Khalsa or ‘pure’) should always be ready to defend themselves and others against tyranny; India’s ‘sword arm’ was born, and to this day, Sikhs have a reputation for being good fighters.

The Guru’s supporters included individuals from Shia and Sufi minorities, sects within Islam. Yet his resistance to totalitarianism came at huge personal cost. Not only did he lose his father but his four sons were martyred, the younger two bricked alive for their refusal to accept Islam. Despite this, the Guru refused to vilify any adherents of Islam, but explicitly instructed Sikhs to ‘recognise the human race as one.’

But while Sikhism teaches that all religious traditions should be respected, Islam has a long history of targeting Sikh communities. Even today, persecution still exists. Prior to the collapse of the Kabul government in 1992, there were 220,000 Sikhs and Hindus across Afghanistan. Only 220 families now remain. Many have fled atrocities and have found sanctuary in the West, for the simple reason they are considered ‘Kafirs’, a derogatory term for non-Muslims. The remaining Sikhs have been forced to wear yellow patches to identify themselves in public, in a similar way to Jews being made to wear the Star of David under the Third Reich. Kidnappings, violence and compulsion to pay the jizya – a tax imposed on non-Muslims – have almost become societal norms.

Sadly, things aren’t much better across the border in Pakistan. While provision is made for Sikhs to make their annual pilgrimage to Nankana Sahib, the birthplace of Guru Nanak, pilgrims often require armed guards. In 2014, 500 or so Sikh families were forced to leave Peshawar due to a hostile environment and threats from extremists. Worst still Sikhs have been beheaded in Pakistan’s tribal northwest – there is little to separate this, and the abject barbarity meted out on Christians and Yazidis by Islamic State.

As Sikhs well know, they are not the only minority group in the region to be targeted by Islamists. Much of the religious brutality that Guru Tegh Bahadur railed against remains to this day. According to Amnesty International, Hindu women are frequently forced to convert to Islam in Pakistan’s Sindh province, before being married off to Muslim husbands. Blasphemy laws are used as a tool to persecute minority faiths, including the Ahmadiyya sect, which faces criminal charges for simply practicing their faith.

Much of this has been ignored by the West. But echoes are now being heard across Europe, so it is becoming harder to turn a blind eye. Christians are targeted in Syria — and in France. Ahmadiyya Muslims are persecuted in Pakistan – and in Britain, as the sectarian murder of the Ahmadi shopkeeper Asad Shah showed. And Sikhs are attacked in Afghanistan — and in Germany. The pernicious force of radical Islam is seeping into Western culture and undermining religious freedom.

Faced with this, can Europe’s political elite continue to guarantee the safety of church or temple-goers? There are, in reality no such guarantees. France’s 40,000 churches can’t all be protected. Nor can the thousands of Sikhs who reside in Germany. British counter-terror experts have just advised vicars that churches should ratchet up security measures with bouncers and CCTV. This follows the government’s introduction of a security-funding scheme for places of worship, but with the best will in the world it is difficult, if not impossible, to prevent those bent on murder and mayhem from succeeding.

If any good is to come of all this, it could be found in a show of unity from the religious groups under attack from Islamists. In 2008, I attended an event where the former Chief Rabbi, Lord Sacks said: ‘Sikhs and Jews share a lot in common. They tried to kill us, we survived, now lets eat.’ The attack on the temple in Germany is a timely reminder that Islamists don’t just see the West as their mortal enemy, but view all who don’t subscribe to their warped ideology as fair game.