You are here: Home / MidEastGulf / The Islamic State is now broadcasting a satellite TV channel in Iraq
View image on Twitter 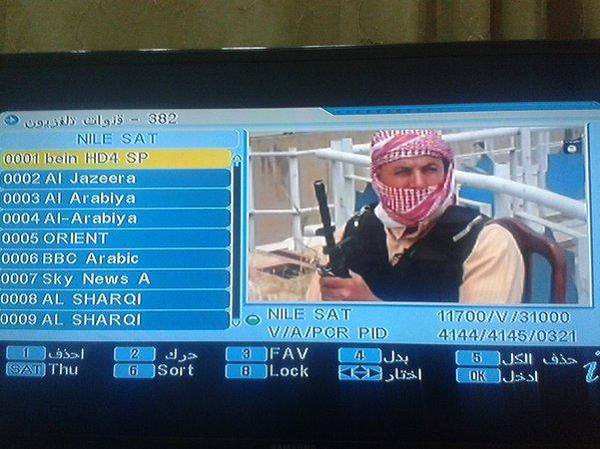 The channel, known as BEIN HD4, is broadcast on Nilesat, an Egyptian satellite company whose biggest shareholder is the public Egyptian Radio & Television Union. It’s not yet clear if the new Islamic State channel is being broadcast with Nilesat and Egyptian permission. The company has yet to respond to a request for comment.

The new channel broadcasts news, reports, and media from the Islamic State, a group who are well-known for investing in slick video reports from the front lines of its wars.

Satellite television has played a unique role in the Middle East since its introduction to the region in the 1990s. The strictly government-controlled media landscape was transformed by international news and entertainment. Today, the majority of people in the region have a satellite dish. It’s widely acknowledged that the technology has been a key ingredient in change within the region.

Sunday’s station launch was expected. Islamic State authorities have been promising a television station for months, perhaps to compete with other political voices across the region.

Hamas and Hezbollah have each operated their own television stations for years, using the medium to broadcast news and propaganda to a wide audience.

Mosul was once a major Iraqi city of over 2.5 million people. Since it was captured by the Islamic State in 2014, as many as two million inhabitants fled. Since then, it has been a major target of the Iraqi government and American military’s war against the Islamic State.

While BEIN HD4 is a new step within the Middle East, the Islamic State’s Internet media operations—which operate largely on American networks like Facebook and Twitter—have a global reach that has Western powers looking for ways to strike it down.