You are here: Home / Africa / The Islamic State in West Africa 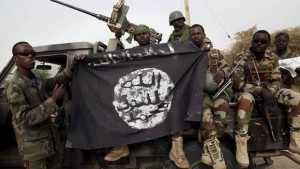 Nigerian Army announced that it had driven the Islamic State in West Africa, also known as Boko Haram, from Gamboru, a town on the border with Cameroon and an important crossing point between the two countries. Boko Haram had held the town for over a year—apart from a brief period in February when it was forced out by the Chadian army. This is not the first victory claimed by the Nigerian Army since President Muhammadu Buhari took over the government in late May, but his recent orders to the army to destroy Boko Haram within three months nonetheless look completely unattainable.

Between 15,000 and 20,000 people have died from attacks by Boko Haram since its campaign began in earnest in 2009, and around 1.5 million people have been displaced from their homes. High-profile attacks, such as the kidnapping of 276 schoolgirls in April last year—219 of whom remain missing—are dwarfed by less widely reported incidents that have resulted, for example, in the group’s abduction of another 2,000 women since the start of 2014. In the four days immediately preceding the army assault on Gamboru, up to 80 people died in Boko Haram attacks on three villages in the same region. About 1,000 have been killed since Boko Haram changed its name to the Islamic State in West Africa in April.

Clearly the task of defeating Boko Haram is not straightforward. Some 60,000 Nigerian troops have been deployed and the neighboring countries of Benin, Niger, Chad, and Cameroon have agreed with Nigeria to form a joint task force of 8,700 troops based in the Chadian capital N’Djamena. Such regional cooperation has been difficult in the past, and still presents problems. This agreement, should it come to fruition, demonstrates a shared and growing concern that Boko Haram attacks could lead to serious instability and further disruption of cross-border trade unless met with considerably more determination than has been evident in the past.

Although Boko Haram has been most active in northeastern Nigeria and the bordering areas of Niger, Chad, and Cameroon around Lake Chad—even conducting attacks in N’Djamena—it has often struck further afield. Attacks and arrests of Boko Haram cells have been reported as far away as Lagos and in the capital Abuja. Army successes are well broadcast, but are often exaggerated uncredible; reports of the death of Abubakar Shekau, the leader of Boko Haram, have become so frequent that many government loyalists argue that he has had a number of doubles operating in his name. An announcement on August 12 by Idriss Deby, the President of Chad, that Shekau had died yet again, and that his successor was willing to negotiate, was met by a scornful audiotape from Shekau that reassured the movement that he was still its leader.

The alliance between Boko Haram and the Islamic State does not appear to have made any significant difference to its support. Although Ansaru, a Nigerian group similarly inspired by bin Ladinism, has been critical of Boko Haram for its frequent attacks against mosques, markets, and bus stations, it does not appear to have drawn defectors as a result. Boko Haram never pledged allegiance to al-Qaeda, and although it received some support and training from al-Qaeda groups in the Maghreb, it has by now acquired enough expertise and weaponry to be self-sufficient. Indeed, it has found ready resupply from the Nigerian Army, whether as a result of successful operations or through more devious means.

In a clear break with the lackluster campaign of the past, President Buhari sacked the heads of all three branches of his armed forces as well as his Chief of Defense Staff and the National Security Advisor in July and August. One of his first acts upon inauguration was to order the army command to base itself in Maiduguri, the capital of the troubled Borno State in the northeast. But although more pressure may have driven Boko Haram to mount more traditional terrorist attacks rather than military assaults, the levels of violence have not gone down.

Indeed, it may have been advice from the Islamic State that has caused Boko Haram to retreat from urban areas that were hard to hold and focus on retaining territory where the armed forces find it difficult to operate, such as the hills and forests along the border with Cameroon. In an ugly parallel with Islamic State tactics, Boko Haram continues to terrorize the population over a wide and unpredictable area through suicide bombings, often carried out by very young girls. As Shekau said in his broadcast on August 16, President Buhari might just as well have set a three year deadline for his armed forces as a three month one. The fight will go on for some time to come.