You are here: Home / Analysis / The Islamic State franchise and Rohingya armed group: Bay of Bengal trinity of terror 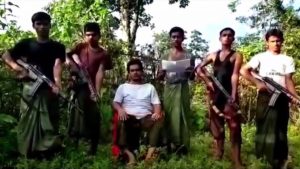 A detailed investigation inside Myanmar’s Rakhine state has revealed that a Rohingya armed group brandishing guns and swords is responsible for at least one, and potentially a second, massacre of up to 99 Hindu women, men and children as well as additional unlawful killings and abductions of Hindu villagers in August 2017, like reported by atimes.com.

Undoubtedly, accountability for and individual criminal responsibility for these atrocities are every bit as crucial as for the crimes carried out by Myanmar’s security forces in Rakhine state and elsewhere in Myanmar.

There is little doubt that terrorist and militant groups have taken advantage of the disfranchised Rohingya, including recruiting them as cannon fodder for al-Qaeda in Afghanistan. In an interview with the Karachi-based newspaper Ummat on September 28, 2001, Osama bin Laden said: “There are areas in all parts of the world where strong jihadi forces are present, from Indonesia to Algeria, from Kabul to Chechnya, from Bosnia to Sudan, and from Burma to Kashmir.”

In mentioning Burma, he was most probably referring to a small group of Rohingya on the Bangladesh-Myanmar border. Today, it is clear that the militant-terrorist group Arakan Rohingya Salvation Army (ARSA), the Islamic State (ISIS) franchise in Bangladesh, the Jamaat-ul Mujahideen Bangladesh (JMB), and its offshoot the Neo-JMB have all been using the same modus operandi of attacking police stations and posts. ISIS-affiliated individuals and groups have been feverishly attacking police stations as far off as Kenya, Iraq and Libya.

Just as these terrorists slitted the throats of Hindu villagers in Myanmar, the same was done to victims in France, Libya and elsewhere – all in accordance with the creed promulgated by the ISIS terror group’s official Al-Hayat Media Center. It released footage on January 26 calling on jihadis to destroy the kuffar (non-believers) in “Europe, America, Russia, Australia and elsewhere” by slitting their throats and watching them die. The English-language nasheed(religious hymn) in the video promises paradise in the afterlife for those who take up the cause. The series of throat-slitting criminal acts is a fact observed by the United Nations itself.

The forced conversion of captive women into the jihadis’ perverted Islamic ideologies and beliefs can be easily seen from the testimonies of Yazidi and Myanmar Hindu survivors. Bosnian Serbs were less zealous in their systematic rape and sexual violence than these Islamist terrorists.

The striking similarities of the modi operandi of these Islamist terrorists and criminals are not only of probative value in any criminal proceeding but also tend to show the influences of Islamic State’s ideologies and methodologies, and thus reinforces an intelligence report on a joint JMB-ARSA training stint.

In an interview published in an issue of the Islamic State magazine Dabiq, Tamim Chowdhury (using the nom de guerre Abu Ibrahim Hanif), who was the head of the organization’s Bangladesh wing, said efforts to recruit in Bangladesh had gained “great momentum,” with many Muslims joining its ranks, and reiterated that jihad in Bengal was a stepping-stone for jihad in Myanmar. He added that ISIS had succeeded in building a base by attracting Muslims following the organization’s campaign in the Bengali language on social media.

The fact that madrassas in Bangladesh remain hotbeds of Islamist militancy and terrorism remains undeterred. One of the most significant links was unearthed in March 2009 when a madrassa in Bhola, southern Bangladesh, was raided by an anti-terrorist division, turning up 10 firearms, 2,500 rounds of ammunition and radical Islamic literature. Investigations revealed that the madrassa was funded by the British-registered charity Green Crescent, and that the founder, British citizen Dr Faisal Mostafa, had close links to the JMB and its current leader, Saidur Rahman.

This is hardly surprising. In Malaysia, an Islamist politician, who was the founder of a madrassa, created untold havoc in a foreign sovereign independent member-state of the UN with his fellow terrorists associated with the Nusra Front. In northern Rakhine state, the main militant force is mostly led by young Islamic clerics (known as “Mullahs” or “Maulvis”) or scholars (“Hafiz”), and it appears to have been the issuance of fatwas that was decisive in persuading many to support the terrorism and militant approach.

The Bay of Bengal, the largest bay in the world, forms the northeastern part of the Indian Ocean and is bordered mostly by India and Sri Lanka to the west, Bangladesh to the north, and Myanmar to the east. There are also other Southeast Asian nations dependent of the Bay of Bengal for maritime use.

In pursuit of UN Security Council Resolution 2249 (2015), the South Asian regional-security group of nations and the Association of Southeast Asian Nations, in the reaffirmation that terrorism in all forms and manifestations constitutes one of the most serious threats to international peace and security, must pursue the combat by all means this unprecedented threat to international peace and security in full cooperation with the UNSC toward the elimination of this dreadful scourge to mankind that has been formed by the unholy trinity of ISIS, JMB and ARSA and ensure that those responsible for committing or are otherwise responsible for terrorist acts, violations of international humanitarian law or violations or abuses of human rights are held accountable.

The whole of Asia and the world are now truly excited at the prospect of sovereign independent nation-states coordinating their efforts to prevent and suppress terrorist acts committed specifically by these heinous terrorists.