You are here: Home / Senza categoria / The Islamic State-Al-Qaeda conspiracy theories on COVID-19 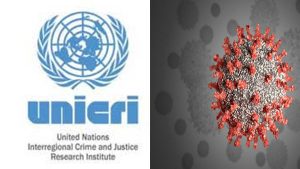 Al-Qaeda and ISIS are exploiting the COVID-19 pandemic to spread conspiracy theories that the virus is “punishing the unbelievers”, is “God”s wrath upon the West” and incites terrorists to use it as a form of biological weapon, according to a UN report. The report titled ”Stop the virus of disinformation: the malicious use of social media by terrorist, violent extremist and criminal groups during the COVID-19 pandemic” was released by the United Nations Interregional Crime and Justice Research Institute (UNICRI) on Wednesday.

It said that criminals and violent extremists are exploiting the pandemic to build their support networks, undermine trust in government and even weaponise the virus. The report added that terrorist, violent extremist and organised criminal groups have maliciously used social media to disseminate conspiracy theories about the origin of COVID-19.

“Groups associated with ISIL and Al-Qaeda have also spread conspiracy theories that assert that the virus is a ”soldier of Allah” that is punishing the unbelievers and the enemies that have damaged Muslims over the last years. For example, ISIL and Al-Qaeda claimed that the virus is God’s wrath upon the West,” the report said. Similarly, Al-Shabaab declared that the coronavirus disease is spread by the “crusader forces who have invaded the country and the disbelieving countries that support them”, the report said.

The Global Fatwa Index has identified COVID-19 related messages from groups associated with ISIS and al-Qaeda, including non-official fatwas that called on ISIS members who have contracted COVID-19 to act as “biological bombs” by “deliberately spreading the disease among the organisation”s enemies,” it said. UNICRI Director Antonia Marie De Meo wrote in the introduction to the report that it is “alarming that some terrorist and violent extremist groups have attempted to misuse social media to incite potential terrorists to intentionally spread COVID-19 and to use it as an improvised form of a biological weapon.” “There are cases in which right-wing extremist groups… explicitly asked their followers to spread the virus by coughing on their local minority or by attending to specific places where religious or racial minorities gather. Other groups…advocate to spread the coronavirus disease in countries with large populations or high levels of pollution,” the report said.

It also notes the case of “inspired terrorism” was that of Timothy Wilson, who plotted to detonate a bomb in a hospital caring for coronavirus patients in Kansas City. He died during a firefight with the US Federal Bureau of Investigation in March. According to the report, the researchers examined three groups of non-State actors: right-wing extremists; groups associated with the ISIS or Da”esh terror group and al-Qaeda; and organised crime groups.

The researchers said that the main conclusions that they have drawn from their study were that violent non-state actors, including terrorist, violent extremist and organised criminal groups, have been maliciously using social media during COVID-19. Right-wing extremist groups and the groups associated with ISIS and al-Qaeda have tried to use the pandemic to reinforce their narratives (either racist, anti-Semitic, Islamophobic and anti-immigrant or against democracy and modernisation). Organised criminal groups have been trying to take advantage of the pandemic mainly to portray a positive image of their organisations to expand their activities and penetrate the legal economy, the report said.

The conspiracy theories usually attribute the origin of the virus to governments, religious or ethnic groups, secret networks, companies or businessmen who, according to these interpretations, are trying to push through secret agendas such as globalist depopulation, the control of the world or the generation of financial incomes through the sale of already produced vaccines and drug treatments, it said. Right-wing extremist groups have also circulated conspiracy theories that blame immigrants and foreigners as the ones responsible for spreading the virus. The New Jersey European Heritage Association (NJEHA) shared a campaign where they placed stickers with slogans such as “Stop coronavirus – deport all illegal aliens”, “migrants accepted no – we are infected”, “open borders is the virus”, “multicultural is the virus”, “open borders spread disease” around the city, the report said. Conspiracy theories such as Accelerationism, QAnon, and Boogaloo have also been used to misrepresent the COVID-19 pandemic, it said.