You are here: Home / Senza categoria / The islamic ‘jihadist’ with a suitcase full of lingerie and sex-toys… 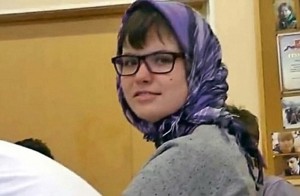 A student who set off for Syria with newly-bought lace lingerie to ‘impress’ her jihadist lover has lied when she claimed she was motivated only by romantic feelings for a man she had only met on the web, a Russian court was told.

Prosecutors have demanded five years in jail for Varvara Karaulova, 21, for seeking to join a terrorist organisation, claiming she intended to become a ‘sniper or suicide bomber’.

Her family had claimed that the ‘sexy underwear’ she packed proved she had mistakenly fallen in love with a terrorist, and denied she planned to become a killer.

She had not told her parents she was travelling to Syria, and for several years had been in internet contact with terror group members, while she also started to wear a hijab.

The A-grade Moscow University philosophy student was stopped at the Turkish-Syrian border en route to live with 36-year-old fanatic Airat Samatov, and was deported back to Russia.

She agreed to assist the FSB counterintelligence agency, once headed by Vladimir Putin, but then secretly tipped off her intended lover that Russian spies were seeking to trap him, the military court heard.

‘The intentions of (Karaulova) have nothing to do with her romantic feelings for a militant, as she has claimed multiple times,’ said a state prosecutor as she sat in a court cage.

She ‘had discussed the organisation of terrorist attacks in Kazan’ – a Russian city which will host 2018 FIFA World Cup games.

‘She was interested in bombing activity and conducting military actions in the Islamic state,’ he said.

‘It has been established that she was travelling to Syria to join a terrorist organisation, and moreover it didn’t matter to her which one – Jabhat Al-Nusra or Islamic State.’

She was in close touch with two other terrorists apart from Samatov, for whom she claimed to have romantic feelings, he alleged.

‘One man transferred her the money for relocation, another one met her, and later she was messaging the third one,’ he said.

‘The accusations are not in any way related to any sort of romantic feelings to one or another representative of IS. She shared ideology of this organisation.’

Her lawyer Ilya Novikov told the court she had no intention to become a terrorist, and the prosecution had failed to prove otherwise.

‘The position of the prosecution is that if she is doing a terrorist’s laundry, cooking for him, and bearing him children, then she is a terrorist herself,’ he said.

He claimed the Russian state was seeking to ‘make an example’ of Karaulova – who has changed her name to Ivanova – to show that ‘IS [militants] are bad, one shouldn’t fall in love with them for fear of being arrested’.

Earlier in court she admitted that having agreed to assist the FSB, she used various other names online to hide her identity in chatting to her jihadist, and was actively plotting another attempt to reach Syria, said prosecutors.

‘I felt very lonely, I loved him, I missed him very much,’ she wept in court.

‘At that moment I was sure that he was concerned about me.

‘At first I just wanted to tell that I was okay, but then I just could not stop.’

She did not want him to come to any ‘harm’.

She claimed she had not followed the news and was attracted to travelling to meet her jihadist beau because ‘ISIS is a country that cares for its people’.

Under questioning from the judge, she said: ‘People don’t smoke there nor drink alcohol.’

She testified: ‘It is a country where the main goal is not to make money but to care for people and children.’

Denying she was being recruited as a suicide bomber, she said: ‘A woman is treated like a treasure.

‘She is valued for her brain and abilities and not only for her beauty.’

Claiming in court she was motivated only by love, she said: ‘I have not joined anything.

‘I am not a terrorist and I was certainly not going to become one.

‘When these words about suicide bombers are uttered, I don’t know even what word to choose. It’s impossible even to listen to all these things.’

She will have one more chance to address the judge before a verdict is delivered later this month.

The trial comes as Russia is planning moves to assess students for their vulnerability to extremist ideas.