You are here: Home / Senza categoria / The ISIS slaughter of Christians in Syria and Iraq is a ‘genocide’ 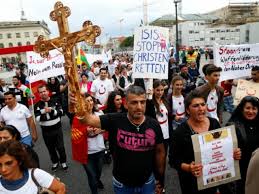 Reverend Franklin Graham wonders why the world refuses to condemn the brutal acts of the Islamic State for what it truly is—Christian genocide.

“It is genocide — and the world seems largely silent about it. Genocide perpetrated by the Islamic State against Christians, Yazidis, and other religious minorities of Syria and Iraq. And their methods are unimaginably cruel and heinous,” he deplored on his Facebook page.

Just a few days ago, Graham learned that three Assyrian Christians were executed on Sept. 23, which is the Muslim “Feast of Sacrifice.” The ISIS militants even threatened to kill more hostages. Graham was also horrified by reports that 12 other Christians were murdered on Aug. 28.

“Why were they killed? For refusing to renounce their faith in Jesus Christ. Eyewitnesses said that ISIS militants crucified a 12-year-old Christian boy and his Syrian missionary father along with two other men after mercilessly brutalising them,” he said. “They cut off the boy’s fingertips to try to get his father to convert to Islam. They left their bodies hanging on the crosses for two days under signs reading ‘infidels.'”

Their atrocities did not stop there, since the ISIS militants publicly raped two Christian women that same day, then beheaded them along with six other individuals who refused to convert to Islam.

What’s worse about these brutal acts is that ISIS militants are carrying them out in the guise of religion.

“The Islamist extremists were carrying out what they believe is Allah’s proscribed punishment for those that leave Islam or take part in a fight against Islam,” Ryan Mauro, national security analyst for the Clarion Project, told Fox News. “If you want to defeat ISIS and other Islamist extremists, you need to defeat their doctrinal foundation.”