You are here: Home / MidEastGulf / The Iranian ‘maritime police’ project 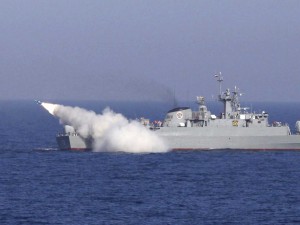 Experienced in fighting proxy wars in Iraq, Syria, Yemen and Lebanon, the Iranian leadership is aware of the important role the military plays in imposing Tehran’s foreign policy in the region and beyond.
At least this is what one can garner from hearing Iranian military Chief of Staff Mohammad Bagheri’s recent statements, which show that Tehran is entertaining the idea of gaining naval superiority by establishing bases in Syria and Yemen, convinced that “having naval bases in remote distances is not less than nuclear power. It is ten times more important and creates deterrence.”

Bagheri also said that Iran needs a fleet in the Indian Ocean that would be equal to the one stationed in the Gulf of Oman, and urged the navy to enhance its intelligence activities by working on satellite and cyber space technologies, as well as by developing naval drones.

Although it is doubtful that Iran has the means to effect such a costly naval expansion, it is obvious that Tehran has two main strategic goals: To strengthen its military power and flex its muscle beyond its borders, and revive the Shah’s old dream of becoming the Gulf’s policeman. Nowadays, however, Iran wants to be the region’s policeman from the Indian Ocean to the Mediterranean Sea.

Such schemes are bound to increase tension in our already troubled region and push countries to resort to military power as a political tool. The Iranian chief of staff’s justification that the aim of this military objective is to counter piracy does not seem logical, knowing that Iran has limited maritime trade when compared to countries such as India, the Gulf, Egypt and others that use the maritime corridors in the Gulf waters. Moreover, piracy does not exist in the Sea of Oman and in the Mediterranean. It is not clear whether his statement is simply bragging or a reflection of the new Iranian strategy after it had to forego its nuclear project under Western pressure, which resulted in Tehran dropping it in return for the West lifting sanctions.

What is clear, though, is that the new Iranian design, followed the signing of the nuclear deal, is to gain military superiority, in total contradiction to the US administration’s declaration that the nuclear deal will open the Iranian market to its benefit.

The logical thing to believe is that talk about Iranian naval bases in the Mediterranean is an exaggeration, for European countries will not allow such a presence in their waters, particularly belonging to a state of whose activities they are suspicious.

Neither will Israel allow it. It once sent back an Iranian ship loaded with weapons on its way through Bab Al-Mandab. That was preceded by chases by the Israeli navy of Iranian ships that were heading to Sudan; one was even bombed.

In case Iran succeeds in maintaining the regime of Bashar Assad in Syria, it will not need to build a naval military base there, as it is already ruling the regime in Damascus as part of a deal that Assad will find difficult to get rid of. Iran gave two reasons for engaging in war in Syria: To protect Shiite shrines and to reciprocate the Assad regime’s gesture, for it stood with Iran in the war against Iraq in the 1980s. Neither reason is convincing in political relations.

Tehran considers controlling Syria the way it controls Iraq; in both cases, it hopes to secure its presence, influence and interests in the Arab world. Iran’s military operations in Iraq and Syria are proof that warfare is the new Iranian policy and that enhanced military capability is the main goal of its foreign policy.

Iran is trying to become a hegemon in the region, a dominant force that wishes to expand geographically, both on land and in the sea, after the West lifted its embargo and it opened up to international trade.
This can only mean one thing: That we should brace for heightened arms race and more military adventures in the region.