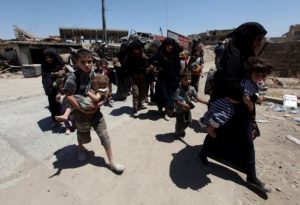 Turkish warplanes and artillery intensively hit several towns on the third day of the offensive launched on northern Syria, and clashes erupted between Turkish soldiers, their allied Syrian opposition armed groups, and the Syrian Democratic Forces (SDF), reporters said on Friday according to kurdistan24.net.

Turkish jets and artillery struck Syria’s Serekaniye (Ras al Ain in Arabic) and Tal Abyad towns, the two border towns that have been the focus of the offensive, said Kurdistan 24 correspondent in Serekaniye.

“The Turkish-backed Syrian armed groups tried to take control of the silos and industrial area in addition to the nearby village of Tal Halaf, near the border, but they failed,” Hoshang Hassan, a Syrian Kurdish journalist reporting in the town, said.

“The SDF fighters repelled three ground attacks by the Turkish-backed Syrian armed groups, hundreds of bodies of the Syrian rebels were in the industrial area,” he said.

On the Turkish side, Reuters journalist in Ceylanpinar said a convoy of 20 armored vehicles carrying Turkish-backed Syrian rebels entered Syria on Friday. Some of them made victory signs, shouted “Allahu akbar” (God is greatest) and waved Syrian rebel flags as they advanced towards Serekaniye (Ras al Ain in Arabic).

In the town of Tal Abyad, Kurdistan 24 correspondent Redwan Bezar said Turkish artillery resumed shelling the outskirts of the town.

So far, about 70,000 people have been displaced from the area due to the bombardment, acording to local and international organizations.

Reports of casualties from both Turkish and Kurdish sides are still contradicted.

The SDF in a statement released on Friday claimed they killed 262 Turkish-backed Syrian militants in the past two days, including Turkish soldiers, while they lost 22 fighters in addition to dozens of civilians.

Turkey’s Defence Ministry, however, said the Turkish military and its Syrian rebel allies have killed 277 militants in total since the beginning f the operation, while only one Turkish soldier lost his life.