You are here: Home / Senza categoria / The insecurity of the Islamic State 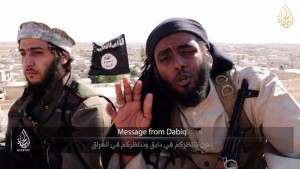 In the latest edition of its English propaganda magazine Dabiq, the Islamic State repeated its call for the killing of Muslim clerics it deems apostates, indicating that it views their very existence as a major threat

For the Islamic State, there are no acceptable alternative viewpoints or voices; all those not aligned with its ideology or under its command must be silenced

Dabiq 14 is the second edition to feature a cover story denouncing alternative Islamic perspectives, and is part of the group’s strategy to incite supporters to kill rival voices

Faced with mounting territorial losses, the Islamic State is trying to expand its battlefield from Iraq and Syria to places like Bangladesh, the EU, and North America by silencing all other voices—even other violent extremists.

The fundamental premise on which the so-called Islamic State is built is one of radical and extreme intolerance. The group believes that the declaration of a ‘caliphate’ in June 2014 became the final answer for the world’s 1.4 billion Sunni Muslims. The choice from that day forward for any Sunni Muslim would be the Islamic State or apostasy. Western attention to the number of people in or supporting the Islamic State ignores the many who reject the group—a far more reflective measure of the group’s influence. Even taking the highest estimates of members across Iraq, Syria, numerous wilayat, and supporters across the globe, the Islamic State has perhaps 50,000-60,000 members. The Islamic State, however, is fixated on those who oppose it. The group lashes out at every cleric, religious leader, and secularist that it views as standing in the way of the world’s Sunni Muslim population accepting the legitimacy of the caliphate.

In the latest edition of its English-language propaganda magazine Dabiq, the Islamic State goes to great lengths to explain why all alternative voices must be silenced. In an article entitled ‘Kill the Imams of Kufr in the West,’ the group calls for the deaths of several Muslim clerics and other well-known figures, all for the crime of working within government and social systems anathema to the Islamic State. According to the group, there is no government or society other than itself, and thus the list of apostates is impossibly long. The group makes no distinction between democracies and dictatorships, seeing both systems as two sides of the same illegitimate coin.

Since the Islamic State believes it is the world’s one true society, it does not need to make distinctions between viewpoints or exceptions to its rule. The reality, however, is far different than the rhetoric—even in places such as Raqqa where the group maintains control and activists continue to resist. The Islamic State has not only failed to rally the world’s Muslims under its black banners, but it has failed to even rally all like-minded violent extremists to its name.

In Dabiq 14—and previously, in Dabiq 7—the Islamic State reveals that while it rejoices in threatening the West with attacks, it is deeply threatened by Muslim leaders not just standing up against the Islamic State, but standing alongside Western societies. The image of Muslims in Paris after the January 2015 Charlie Hebdo attacks holding signs that read ‘je suis Charlie’ is as enraging to the Islamic State as it is bewildering. The image was featured on the cover of the November 2015 Dabiq 7 edition above the title ‘From Hypocrisy to Apostasy,’ where the group laid out its divided vision for the world. It is a vision that is not shared by the overwhelming majority of Sunni Muslims in the world—the very people the Islamic State needs to claim as members, but who in fact are not.