You are here: Home / MidEastGulf / The head of the Syriac Catholic Church said that western ground troops needed to fight Islamic State 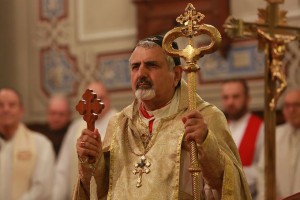 The head of the Syriac Catholic Church said that the support of Syrian rebels by the United States, Great Britain, and France was tantamount to “fomenting the violence” in Syria “under the pretext of a kind of Arab Spring,” Canadian Catholic News reported.

Patriarch Ignatius Joseph III Yonan, who was making a pastoral visit to Ottawa, charged that the Western view of “modernized, civilized rebels” opposing the Assad regime was a “fantasy.”

These rebels were supplied with arms, he said. Thus, it is up to the West to take measures to stop Daesh (the Islamic State or ISIS). They must provide soldiers on the ground to stop the fighting. Airstrikes are not enough, he said, because Daesh fighters mingle with civilians, making the risk too great.

The Patriarch of the Syriac Catholic Church says the West should end the war in Syria and Iraq so refugees and displaced people can return to their homes instead of having to go into exile.

“We hope everyone is able to stay in his or her homeland,” said Archbishop Ignatius Joseph III Younan, Patriarch of Antioch and All the East for the Syrians. Having people living permanently in exile is not a solution, he said in an interview while making a pastoral visit to Ottawa.

But if the bloody conflict continues, and people see Europe granting refugee status to a few hundred thousand people, more and more people will risk their lives to cross the Mediterranean the way little Aylan Kurdi’s family did, or risk being killed traveling over land, he said.

“Of course to look at that poor little boy with the red shirt washed up on the beach in Turkey, reminded people of what’s going on in Syria,” he said. “It’s a tsunami that has hit the country.”

But until Aylan’s picture went around the world, the suffering in Syria and Iraq caused by Daesh -beheadings, rape and burning of people alive–has received little attention. “The Western world is not only indifferent it is an accomplice in continuing that type of violence and killing,” he said.

Syria was one of the most laicized countries in the region, led by Assad’s Baathist Regime, he said. The Sunni Muslim majority there causes fear among the various minorities: the Alawites, the Yazidis, the Ishmaelis and the Christians, he said. He noted Aylan’s family is Kurdish and Kurds have not been targeted by the Assad Regime. Daesh, however, has been threatening Kurds.

“The conflict here became bloody because of the intervention of Western countries,” he said. Instead the West should have helped those in conflict “to find a way for reconciliation” under the auspices of the United Nations in both Syria and Iraq.

Circumstances for Christians in the region have continued to worsen, to the point of “catastrophe.”

A year ago, Daesh invaded Mosul in Iraq, then the Nineveh plain, forcing 140,000 Christians to flee their ancient homeland for refuge in Kurdistan, he said. “They are in a dire situation, in bad conditions.”

There are now 700,000 families in Kurdistan, he said. The Syriac Church had no churches, no facilities to welcome these people. They have been receiving help from the Chaldean bishop of Erbil. The Christian population around Baghdad has been reduced by two thirds.

In Syria, Christians have been forced to flee ancestral homes in areas northwest of Damascus. Daesh has also moved into the Homs diocese, taking a village near Palmyra where Christians have lived for centuries, before the existence of Islam, he said. Daesh has expanded its domination to 50 per cent of the country.

Aleppo, the city with the largest Christian concentration in Syria, has been besieged for three years, he said. “People are losing hope.”

“At least 50 per cent of Christians have been displaced; 25 per cent have gone into exile and left the country,” he said.