You are here: Home / MidEastGulf / The growing special forces war in Iraq and Syria 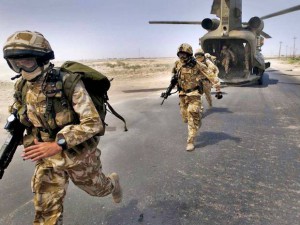 The announcement by US Defence Secretary Ashton Carter on Tuesday that America  would deploy more special operations forces to Iraq to put greater pressure on Islamic State militants, follows publicised successes of US and British special forces already operating in Iraq and Syria.

American SOF activity in Iraq and Syria comprises mainly members of Delta Force and US Navy SEAL Team 6; with some allied SOF contributions involved in joint operations. The total force is probably about 300.

These forces have so far conducted operations in both Syria and Iraq – notably the May 2015 Delta Force killing of IS financier Abu Sayyaf at al-Omar in eastern Syria following surveillance by Britain’s SAS, and the October 2015 raid freeing 69 prisoners from the IS-held town of Hawija near Kirkuk in Iraq, killing 20 IS militants for the loss of one American master sergeant.

Small groups of  SAS have been dropped since October 2014 by RAF Chinook helicopters in western Iraq to operate in designated areas using Barrett sniper rifles and quad bikes fitted with machine guns. According to a British Defence source they have averaged eight IS deaths a day which, while not a concern for IS in the sense that the dead can easily be replaced, must be having an effect on the morale of IS militants deployed to remote locations and vehicle checkpoints.

In October 2015 the US announced it would send an additional 50 SOF personnel to northern Syria as military advisers to Kurdish and rebel forces. Around 40 members of the SAS are already supporting US special forces in Syria and that number is to be doubled. Although the SAS will take part in joint force missions, their main priority in Syria is eliminating high-threat British extremists.

The just-announced US “specialised expeditionary targeting force”, expected to be based in Irbil​, will add another 200 to the existing SOF deployment in Iraq and Syria to bring the total to about 500 SOF personnel.

Secretary Carter said that the new group’s main mission  would be securing Iraq’s borders and building the military capability of Iraqi government and Kurdish Peshmerga forces. He made the somewhat doubtful claim that this was all being done “in full co-ordination of the government of Iraq”, which has since been denied by Iraqi Prime Minister Haider al-Abadi.

According to Carter, the operators will also carry out raids, free hostages and capture IS leaders, and conduct “unilateral operations” in Syria, including intelligence collection. While not amounting to large numbers of boots on the ground, it foreshadows a significant escalation of  the United States’ combat role.

Secretary Carter said there was now an important opportunity to divide IS militants in Iraq from those in Syria. In Iraq most of the IS-occupied towns and cities are on the Euphrates and Tigris rivers which flow through Iraq from eastern Syria and northern Iraq respectively. The road system also follows the lines of the rivers. SOF could be used to harass and interdict IS’s road lines of communication, making governance from Raqqah on the Euphrates River in Syria (where IS has its headquarters) more difficult. Mosul in Iraq could also become isolated.

Such SOF operations are at high risk of having casualties and in the worst case, they risk having SOF cut off and becoming prisoners of IS. IS is also likely to respond by forward-deploying surface-to-air-missiles that would be effective against the helicopters and low-flying strike aircraft needed to support SOF operations in remote areas.

IS can be expected to react angrily because its main priority is consolidating the caliphate in Syria and Iraq – not toppling Bashar al-Assad’s government in Syria or threatening Haider al-Abadi’s government in Iraq.

Australia also has an SOF presence in Iraq. Our Special Operations Task Group   comprises 80 soldiers based at the Taji military complex, 30 kilometres north of Baghdad. Most are from the Army’s 2nd Commando Regiment. There has been no mention of any Australian SAS deployment.

When the SOTG were first deployed to Dubai in September 2014, an unwelcoming Iraqi government dragged its heels on a status of forces agreement – an issue which should have been resolved by Defence and the Department of Foreign Affairs and  Trade before the deployment.  (SOFAs protect visiting foreign forces from civilian prosecution and formalise their presence in another country.)

Other protective options were considered, with the 200 SOTG personnel eventually being issued with diplomatic passports. The Iraqi government reluctantly agreed to extend confidential discretionary rights to Australian SOF, and they were deployed into Iraq in November 2014.

The main role of the SOTG personnel is to provide training to Iraq’s Counter Terrorism Service. They are limited in what they are allowed to do “outside the wire”. The Australian government has authorised them to advise Iraqi Army units of battalion-size and larger in the field, but the Iraqi government has not approved that support.

Successive Australian governments have limited what our SOF personnel can do on operations – which has given us a “chocolate soldier” reputation with our allies. This is not a reflection on the soldiers themselves, but rather on our risk-averse management system. This situation does not apply to Australian SOF soldiers on exchange or attachment with US or British special forces where they are effectively beyond Australian control.

There are both positives and negatives for more robust SOF operations against IS. They include: allowing politicians to be hairy-chested about taking the fight to the enemy; they provide necessary operational experience for SOF; they will help to degrade local control by a brutal and evil enemy; there will be a reduced likelihood of civilian casualties – compared to air strikes; they will help the Syrian government (which some would see as a negative) and; they will help to move the Kurds closer to their dream of an independent and internationally recognised Kurdistan.

Factors against include: helping a corrupt Iraqi Shia government in Baghdad regain control of a minority Sunni population that does not want them back; allowing other unsavoury Islamist groups to gain more control in Syria; inconclusive long-term strategic outcomes unless backed by a major ground offensive; they are being opposed by our ally Iraq, and Iran; they will complicate the latest iteration of a centuries-old war between Sunni and Shia Muslims; they will increase the prospect of blowback terrorism in Western countries; they will increase the likelihood of Russian SOF becoming involved in Syria, and; they will alienate Turkey which is determined to curb Kurdish irredentism.

While satisfying an understandable Western desire for revenge against IS, the new SOF commitment looks likely to complicate an already confused military situation without advancing the region towards a long-term political solution.