You are here: Home / Senza categoria / The greatest threat to the U.S. Army (and its not Russia, China or Iran) 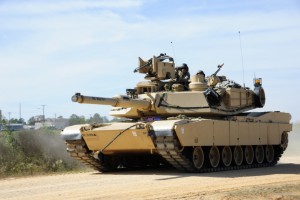 The US Army is in no rush to replace its combat vehicles. Sure, the service is upgrading its European Stryker brigade with 30 mm guns and anti-tank missile launchers. But there’s no real plan for wholesale replacements of Abrams tanks, Bradley troop carriers, and Paladin howitzers before 2030. For as Brigadier General David Bassett, the Army’s head buyer for ground combat systems, complained at last week’s Association of the United States Army (AUSA) show, “years ago we were limited by technology; now we are limited by money… I see a lot of great technology and ideas but we are constrained by budget.” I must say, however, that I am less concerned. Fact is, buyers are always constrained by technology, but contractors displaying at AUSA 2015 showed ideas well-grounded in technical and operational feasibility.

Aspiring suppliers brought to AUSA lots of light vehicle prototypes for the light infantry brigades, as these formations have the most pressing need for better mobility. The ideas, however, did not stop with tricked-out technicals. Such  vehicles have important uses, but offer questionable protection against land mines, and can’t go everywhere the infantry can march and climb. So what if only the gear needed a ride? At AUSA, HDT showed its Micro Utility Vehicle, a tracked robot that accompanies an infantry squad as its mechanical pack mule. The difference is that the robot doesn’t just carry the troopers’ packs; it also sports and fires a heavy machine-gun, mortar, or missile launcher. Moreover, it’s direct-able from a button on your trigger grip out to almost 400 meters, and a pretty mature concept technologically.

The quest for more firepower like that is leading the Army to seek more adaptable missiles for a wider range of targets. It also means really little precision weapons, such as programmable grenades, or even Raytheon’s rifle-launched Pike, a 40 mm laser beam-rider with a two-kilometer range. Outgunning and outranging the enemy’s dismounted infantry in this way is to aim for what General H.R. McMaster terms squad-level overmatch—perhaps the last place where NATO lacks it tactically against insurgents. (Political advantage, of course, is another matter.) Loren Thompson of the Lexington Institute wrote today that the Army should make precision infantry weapons one of its top priorities. Included in his new “Small Five” of procurement priorities (akin to the “Big Five” programs of the 1980s) were also binocular-sized surveillance radars, updated electronic warfare capabilities, close-range air defense against rockets and artillery rounds, and active protection against anti-tank missiles.

Perhaps that’s part of how lighter vehicles would survive. Active protection systems, like the one that Rafael showed on an M-ATV, may be getting sufficiently lightweight and inexpensive for relatively wide adoption. Indeed, one program manager flatly told to me that he’s not much worried about missiles anymore. Reliably killing tanks from the ground, he thinks, will require either “the long rod”—large caliber APFSDS rounds—or a whole bunch of missiles. Driving down the relative cost of infantry-launched weapons is one approach to blasting through the outer layers of the protective onion. We might call that the Euro-American take on the Chinese anti-access strategy: enough anti-ship (anti-tank) missiles are probably cheaper than ships (tanks). The problem is that weapons exist within war-fighting systems of doctrine, training, and other equipment, so I’m not yet certain how much this will change the balance on the battlefield.

The Army, however, is paying attention. At the battalion or brigade level, the service wants to further redress its lack of firepower with not just missiles, but a new light tank, or “mobile protected firepower vehicle”. BAE Systems brought to the show an M8 Buford, the 17-ton air-droppable tank that the Army had ordered in the mid-1990s. A whole battalion were supposed to replace the M551 Sheridan tanks in the 82nd Airborne Division, but only six examples were built before budget priorities and a queasiness about MOOTWA led to the program’s cancellation in 1996. Still, this is no warmed-over concept. With a new engine, the electronics of the CV90 Mark III or the latest Bradley, suspension components from either, BAE’s transparent armor, one of those active protection systems, and perhaps the turret from the CV90-105—the vehicle could be more than innovative. It could be formidable.

We can’t be assured that all of these ideas will work equally well, but enough testing and field experimentation will eventually show what does. At the show, Assistant Secretary Heidi Shyu talked about her expectation that the Army would need to fight through electronic jamming, cyber attacks, and enemy precision missiles. None of these issues were the pressing ones back in 2008. We can probably have some confidence, though, that the Army won’t try any near-term “great leaps forward”—one marketer used that term to describe its now-defunct Crusader, Future Combat Systems, and Ground Combat Vehicle programs. This time, when the leadership asks whether the next new idea isinnovative, I expect that they’ll also be asking pointedly whether it’s feasible. For as both Churchill and Rutherford said, when you’re out of money, you need to think.