You are here: Home / Senza categoria / The global economic impact of Islamic terrorism 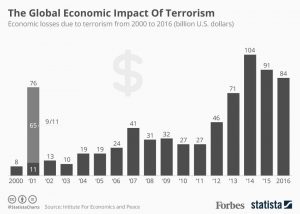 Every year, terrorist attacks make a considerable impact on the world’s economy, like reported by forbes.com.

According to the 2017 Global Terrorism Index, the impact fell by seven percent in 2016, the second year in succession that it declined.

Despite the decline, costs still reached a grim $84 billion last year. Since the attacks on 9/11, economic losses from terrorism generally fluctuated before reaching $41 billion in 2007, primarily as a result of violence in Iraq.

Countries embroiled in conflict tend to suffer the highest economic impact from terrorism. Most of them are situated in the Middle East and North Africa, sub-Saharan Africa and South Asia.

Last year, Iraq had the highest economic impact of terrorism as a share of GDP at 24 percent.

Afghanistan was also ravaged by terrorism with losses coming to 13 percent of GDP while South Sudan had the third-highest impact at 9 percent.

Since 2001 the global economic impact of terrorism has exhibited three peaks corresponding to three major waves of terrorism.

The first was the September 11 attacks in New York and Washington D.C. which resulted in losses from deaths, injuries and property destruction amounting to US$65 billion in
2016 constant dollars.

This excludes the indirect costs to the U.S. economy in general which have not been included in the IEP model but which has been estimated at between 0.7 and one per cent of U.S. GDP, or up US$190 billion.1

The second peak occurred in 2007 and was driven by increases in terrorism in Iraq. This increase is attributed to the activities of al-Qa’ida affiliated terrorist groups and coincided with a coalition troop surge in the country.

Since 2013, the increased levels of violence from mainly ISIL in Syria and Iraq has led to a third surge in the economic impact of terrorism and which has continued for the last four years.

The economic impact of terrorism reached US$84 billion in 2016. The pattern over the last four years follows the rise and decline of ISIL and the spread of terrorism to highly peaceful countries, including those within the OECD.

Countries suffering from conflict experience the most costly economic impacts from terrorism. These countries are mainly situated in the Middle East and North Africa, sub-Saharan Africa and South Asia. In 2016, Iraq once again has the largest economic impact of terrorism as a percentage of GDP, at 24 per
cent.

Afghanistan is the only other country where the economic impact of terrorism is higher than ten per cent of its GDP.

The economic impact of terrorism is smaller than many other forms of violence, accounting for approximately one per cent of the global cost of violence in 2016. This was estimated at $14.3 trillion or 12.6 per cent of global GDP. But this estimate of the cost of terrorism is conservative as the indirect effects of terrorism are only calculated for countries that suffer from higher levels of conflict.

This is a very conservative estimate of the costs associated with terrorism and only calculates globally quantifiable and comparable costs. It does not take into account the costs of counter terrorism or countering violent extremism, nor the impact of diverting public resources to security expenditure away from other government expenditure. Nor does it calculate any of the long term economic implications of terrorism from reduced tourism, business activity, production and investment.