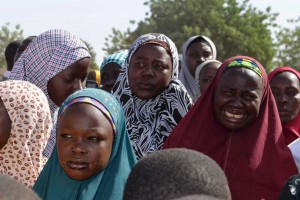 Aisha, 9 years old, and her elder sister, Falmata, 13, were both abducted from their home in Damasak, in Nigeria’s northeastern Borno state, during a raid by Boko Haram militants in March. Their much older brother, Bukkar, isn’t sure they’ll ever return. He believes they might have been drafted into the insurgents’ growing army of female suicide bombers. Indeed, he has every reason to think so.

When militants invaded Damasak, they burned down houses and demanded children be handed over to them. Parents who objected were killed, and eventually hundreds of children—girls in particular—were taken by force.

“They set our house on fire and walked through the streets kidnapping children who were under 15 years of age and killing those who were above that age,” Bukkar remembers. “They were most interested in little girls, whom they plan to use as suicide bombers.”

Boko Haram has become notorious for using young female suicide bombers. The majority of those recognized have been adolescent girls, with some as young as 10. Other young women are forced to become soldiers and sex slaves.

“Militants feel it is easier to intimidate and brainwash young girls than adult women. Besides, these girls come cheap, and most of them are extremely loyal,” says Yusuf Mohammed, who works with young people affected by trauma in Maiduguri, the birthplace of Boko Haram.

The use of these young women began not long after more than 200 young women were kidnapped from their school in Chibok last year, an incident that provoked global outrage and the #BringBackOurGirls campaign that, so far, has proved fruitless.

The corresponding time frame and the age of the suicide bombers killed and captured since then have prompted speculation that Boko Haram has enlisted some of the kidnapped girls from Chibok in its jihad. The alleged bomber in a July 2014 attack at a university in Kano bore a marked resemblance to one of the abducted schoolgirls.

There’s a strong possibility that after more than a year in captivity, some of the Chibok girls could have been indoctrinated by their kidnappers to carry out suicide attacks, but there’s no clear evidence that this is the case. The government believes the Chibok girls are still more or less together and being held by the terrorists in a secret location. Meanwhile Boko Haram has abducted hundreds of young women and girls in other towns and villages in Nigeria’s northeastern region.

According to local sources, Boko Haram operates suicide bombing training camps in Kirenuwa town in Marte, 112 kilometers north of Maiduguri, and in the Kala Balge area in northern Borno. Those are in addition to parts of the deadly Sambisa forest, where the Nigerian military is carrying out an offensive against the insurgents.

These same local sources say that when women are abducted by the militants the “young and smart” girls are separated from the older ones and trained on how to handle heavy weapons or carry out suicide attacks, or both.

This month, soldiers who spoke on condition of anonymity said they were shocked when women opened fire on troops who had come to rescue them in Sambisa forest. The women, they said, killed seven soldiers. A dozen women died in the firefight.

Indoctrinated female bombers are persuaded to seek martyrdom for fighting God’s cause.

“They repeatedly told us that the best jihad is the one in which your horse is slain and your blood is spilled,” said Rukaya, 13, who was rescued by Niger’s armed forces from a Boko Haram camp in Bosso, in southeastern Niger along the border with Nigeria, then taken to a camp for displaced persons in Diffa, deeper in Niger’s territory.

In the past, Boko Haram gave financial incentives to its bombers. In its first-ever suicide attack—a 2011 bombing at the police headquarters in the national capital of Abuja—Boko Haram was reported to have offered the male suicide bomber the equivalent of $24,870 for the operation, which he bequeathed to his four children.

It is doubtful that the rising number of female bombers or their families received any such largesse.

Over the past 13 months, there has been a huge rise in female suicide bombings and huge increase in casualties as well. The attacks have claimed up to 78 victims. Boko Haram’s first female bomber was a woman believed to be in her early twenties who rode a motorcycle into military barracks and blew herself up at a checkpoint in the northeastern city of Gombe last June. In its latest suicide attack, at least seven people were killed and 33 others seriously wounded when a female bomber, believed to be 10 years old, blew herself up at a bus station on May 16 in Damaturu, the capital of Nigeria’s northeastern Yobe State.

Last week, the Borno State deputy governor said Boko Haram had deployed more than 600 women throughout Maiduguri, with the goal of carrying out suicide bombings in the metropolis. While this number is completely unfeasible, female terrorists have had the advantage that, previously at least, they attracted less attention from authorities and could move about largely unquestioned: the long hijab, or covering, worn by Muslim women can easily hide bombs, and strict standards of morality make it hard for male security officers to search female suspects. Last November, two women dressed in full hijabs, which covered everything but their faces, entered a busy Maiduguri market and detonated explosives, killing more than 40 people. A 20-year-old woman, who was one of the suicide bombers, had a bomb tied firmly to her back in the same manner used by many women to carry their children in northern Nigeria.

More recently, as vigilance in the region has increased, some women—particularly teenage girls—have given up the full-length covering for fear they’ll be mistaken for terrorists. They still wear hijab, but the veils are shorter and lighter, or mere head coverings along with simple dresses, so that anyone can see there are no explosives on them.

Meanwhile, the government says the search for the Chibok girls goes on, and continues to heap skepticism on suggestions that they may have been pressed into the ranks of Boko Haram’s women bombers. In an interview on Nigeria’s African Independent Television in March, President Goodluck Jonathan, who lost his reelection bid, argued that Boko Haram would have been only too happy to display the corpses of the Chibok girls for propaganda purposes if they had been killed.

“They are still alive, because when terrorists kill they display,” Jonathan said. “But we can’t just move in with artilleries and clear the place because they may use them as shields, so we are working with the global best practices.”

Kashim Shettima, who is the governor of Borno, said the abducted girls have been kept in bunkers, inside Sambisa forest. “We are suspecting that the Chibok girls are living with the insurgents in bunkers,” Shettima said in a statement presented at a conference on security last week, I think the military must carry out their operations beneath the surface of the earth.” He said Boko Haram is also “known to have dug tunnels to enable them to move from house to house. So, having been left unchallenged for such a long time, such possibilities cannot be ruled out, which poses serious obstacles within the forest.”

With many theories suggesting that the Chibok girls are been kept in the deadly forest, only a complete and effective elimination of the terrorists there can ascertain whether or not the now-famous girls are dead or alive. (source Awdnews)