You are here: Home / Africa / The future of Mali’s peace process 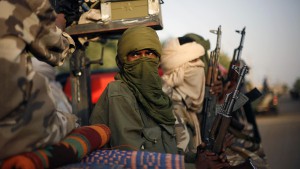 On 20 June Sidi Brahim Ould Sidati, a leader of an Arab rebel group from the Sahara, sat down before an audience of national leaders and foreign dignatories and signed the national peace deal.

Cue cries of delight, celebratory speechmaking – and quiet sighs of relief among the many Malians and international diplomats who had begun to wonder whether this breakthrough could ever be achieved.

We have reached a big moment, after four years of continuing crisis and sporadic conflict that at one stage saw putchist soldiers displace the elected president, just as the jihadists led by Al-Qaeda in the Islamic Maghreb occupied half the vast national territory – which extends from the southern tropical savannah to the emptiness of the desert.

Concern that the Islamist radicals might even break through to seize the capital, Bamako, provoked a dramatic French and West African military intervention in early 2013.

By the end of that year democracy had been restored, with the election of a new head of state, Ibrahim Boubacar Keita, and parliament. But security has proved a much tougher goal to achieve, and even now, jihadists continue to stage regular terror attacks and targeted killings.

So against the context of this recent history, last week’s completion of the peace deal certainly represents a major success.

However, in reality it is just one step in the slow and uncertain process of rebuilding the basic stability that could allow this poor Sahelian country to focus on the essentials of development – food security, jobs, education and health, and civil administration.

For starters, the jihadists have never joined the peace process. Under the banner of radical Islam, they continue to attack the Malian army, French forces and the troops of MINUSMA, the United Nations peacekeeping force.

Despite significant French army successes against the Islamist militants – many of whom are foreign fighters – there seems little prospect of a decline in the incidence of terrorism.

Indeed, recently they carried out a murderous assault on a restaurant in Hippodrome, a Bamako district by the old racecourse hitherto favoured by Malians and expats alike for relaxed evenings out.

And in northern regions the risk of attack or abduction seriously inhibits the ability of international agencies or charities to assist with development. Tourism, once a big source of income and work, particularly in Timbuktu, Bamako and towns such as Mopti and Djenné, has practically evaporated.

However, at least the new peace settlement, brokered by Algeria over 10 months of talks, may bring an end to the other dimension of conflict in Mali – the struggle over the campaign for autonomy waged by mainly Tuareg groups in the far north-east.

This is sometimes simplistically depicted as a confrontation between the light-skinned nomads of the Sahara and the black farming and urban populations of the south and the valley of the Niger river.

In fact, the social, ethnic and political make-up of northern Mali is far more complex than such a broad-brush caricature would suggest.

The Coordination des Mouvements de l’Azawad (CMA), the alliance of armed groups that have been fighting for independence or autonomy for the north is dominated by Tuareg, but largely from the Ifoghas tribe, who live in the desert regions close to the Algerian border. It also includes an Arab faction – that of Sidi Brahim Ould Sidati, the man chosen to sign the peace settlment on the rebels’ behalf.

The CMA groups regard the whole of northern Mali as a distinct cultural and political space that they call Azawad.

Yet there are many Tuareg and Arabs, and very many other northerners from a range of backgrounds, who do share this outlook and who wish these regions to remain integral parts of Mali.

Armed groups have emerged, drawn from these populations and united under the banner of their own alliance, the Plateforme. And over the past nine months they have frequently clashed with the CMA.

Indeed, the latter pulled back from a planned signing of the peace deal in May after being driven out of Ménaka, in the east, by a Plateforme faction.

The CMA were only persuaded to sign the pace after allonce the UN promised to put the town under the control of its peacekeepers, with all local armed factions withdrawn.

Even with the peace deal now signed, a huge challenge now faces Malians of all allegiances – the knitting back together of the old cooperative social and economic relationships that have always helped society to function.

In Kidal, the Saharan town that is the main hub of support for the CMA, distrust of the Malian army and state runs deep. Yet across the “south of the north”, in places such as Timbuktu, Gao and Ménaka, many people blame Tuareg autonomist fighters for some of the worst abuses of recent years.

At village level, much reconciliation work and generosity of spirit will be required.

And certainly a fresh level of trust will have to be forged if new institutions planned under the pace deal are to function properly – new elected regional councils with wide powers, and new northern military units forged by blending regular army elements with rebel forces.

The picture is further complicated by the lucrative interests at play in trans-Saharan trafficking of drugs, cigarettes, weapons and people. These have been a key source of revenue for some armed groups and, particularly, for the jihadist militants.

Faced with such an agenda, it is tempting to wonder if Mali really can sustain peace.

However, the country has demonstrated remarkable resilience through the years of crisis. Nor has this been the first bout of conflict to scar its northern regions.

The larger question may be more fundamental. Will this just be the latest peace, condemned to last a few years before breaking down as previous deals have done – or can Mali, step by step, build a deeper national understanding that gradually strengthens long term peace across the north?