You are here: Home / Europe / The French military is raising eagles to destroy terrorist drones 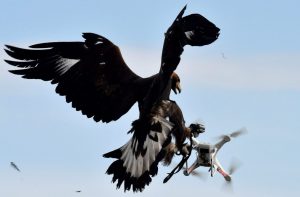 Under French military supervision, four golden eagle chicks hatched last year atop drones — born into a world of terror and machines they would be bred to destroy, like reported by thestar.com.

The eagles — named d’Artagnan, Athos, Porthos and Aramis — grew up with their nemeses. They chased drones through green grass that summer, pecking futilely at composite shells as seen in Sky News footage. They were rewarded with meat, which they ate off the backs of the drones.

When the eagles were ready — this month — d’Artagnan launched screeching from a military control tower across a field, Agence France-Presse reported.

The bird covered 200 meters in 20 seconds, slamming into a drone, then diving with the wreckage into the tall grass.

“The eagles are making good progress,” said the French air force’s commander of a program that adapts the ancient art of falconry to the threats of unmanned flight.

Weeks earlier, on the other side of the world, Iraqi soldiers fired their guns wildly into the sky after a small drone dropped a bomb on them. Terrorists have been modifying devices that can be bought in toy stores into weapons and radio-controlled spies, the Associated Press reported.

The French have been concerned since early 2015, when drones flew over the presidential palace and a restricted military site, according to Agence France-Presse.

No one was harmed. But terrorist attacks later that year, including the November massacre in Paris, inspired military officials to creative prevention.

They wanted a way to take down drones without shooting at them — a potential disaster if one went rogue in a crowded area.

A solution presented itself in an experiment by Dutch police, who last year used a trained eagle to pluck a DJI Phantom drone out of the air, Peter Holley reported for The Washington Post.

With unmatched speed and sight and bone-crushing talons, birds of prey have been trained to hunt for hundreds of years — for other animals, of course. But a wild eagle demonstrated natural hostility to a drone in Australia — as the doomed machine’s final footage revealed on CNN.

Thus, in France, four eggs “were placed before birth on top of drones while still inside the eggshell and, after hatching, kept them there during their early feeding period,” Reuters reported in November.

The eagles were named after characters in “The Three Musketeers,” and by February proved capable of intercepting drones in lightning-fast horizontal chases.

“Soon they will be casting off from peaks in the nearby Pyrenees Mountains,” Agence France-Presse reported.

The military has already ordered a second brood of eagles, according to the outlet.

Meanwhile, d’Artagnan and his siblings will be outfitted with high technology to carry on their war against machines.

“The military is designing mittens of leather and Kevlar, an anti-blast material, to protect their talons,” Agence France-Presse reported.