You are here: Home / MidEastGulf / The forgotten war: Yemen loyalists advancing against rebels in Marib 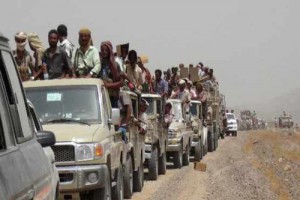 Yemeni loyalist forces, backed by the Saudi-led Arab coalition, said they were advancing Tuesday in a key province east of Sanaa, on the third day of a major offensive against rebels.

The coalition intensified its air strikes against the Iran-backed Huthi rebels earlier this month after a missile attack killed 60 Gulf troops, most of them Emiratis, in Marib province.

Troops loyal to exiled President Abedrabbo Mansour Hadi on Sunday began an all-out offensive against the Shiite rebels in Marib, aiming to retake the capital a year after it fell to the insurgents.

Supported by coalition air cover and ground forces, pro-Hadi fighters captured two strategic hills in the rebel stronghold of Sirwah, on the route to Sanaa, an officer said.

“We have pushed the Huthis out of these two hills and entered Al-Zor,” a rebel position near Sirwah, Captain Zaid al-Qaisi of the Marib-based 14th Brigade told AFP.

“Coalition ground forces, mainly from the United Arab Emirates and also Saudi Arabia, are participating in the offensive,” he said, adding that they have been clearing mines planted by the rebels.

The UAE had said its troops were taking part in the latest operations in Marib and announced Monday the death of a second soldier.

Marib city is controlled by troops and tribes loyal to Hadi, but parts of the oil-rich province are still in the hands of the rebels.

“If you want to go to Sanaa, you need to go to Marib—it’s the last line,” said Brigadier General Ali Al-Kaabi, the commander of the Emirati contingent, quoted in The National Abu Dhabi-based English-language newspaper.

Rebel fighters who had been surrounding Marib city have now been forced into the mountains, he added.

The United Arab Emirates lost 52 soldiers in a missile attack by the rebels on September 4 in Marib, which killed a total of 67 coalition troops.

The Arab alliance has waged daily air strikes since March against the rebels, who are backed by renegade troops loyal to former autocratic president Ali Abdullah Saleh.

The air war came after the insurgents had advanced on the southern port city of Aden, where President Hadi had taken refuge after the Huthis seized the capital in September 2014.

Pro-Hadi fighters, backed by troops freshly trained and armed by Saudi Arabia, pushed the rebels out of Aden in July and have since recaptured four other southern provinces.

The United Nations says nearly 4,900 people have been killed and some 25,000 wounded since late March, while 21 million out of Yemen’s population of 25 million have been affected by the conflict.

The escalation in Marib came as the exiled government backed out of a proposed new round of UN-brokered peace talks, insisting that rebels should withdraw from captured territory.

The UN’s special envoy for Yemen, Ismail Ould Cheikh Ahmed, had announced last week that the government and the rebels agreed to attend talks in Oman, the only Gulf Arab state not in the Saudi-led coalition.