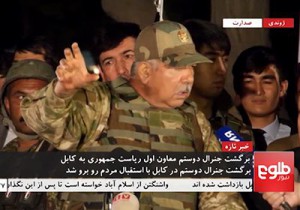 The First Vice President Gen. Abdul Rashid Dostum, who returned to Kabul on Monday after taking part in a month-long military operation in northern Afghanistan, has called on Russia to provide Afghan security forces with military hardware including aircraft.

Speaking at a press conference in Kabul late Monday night, Dostum said that “they [Russia] should not be silent. Our security forces need aircraft, helicopters and equipment. A lot of our equipment is already from Russia. They should help our security forces,” he said.

In addition, he raised the issue of Daesh and said the group is not only a threat to Afghanistan but a threat to the entire region.

“Everyone knows that Afghanistan is not the only country on their [Daesh] plan. If their plan was only Afghanistan – what are Uzbek and Chechen [insurgents] doing here,” Gen. Dostum asked.

“The [Daesh] plan is the Caucasus Mountains, Russia and central Asia. You are watching Syria and Iraq being destroyed and they want to destabilize the security in central Asia,” Dostum said.

Referring to the northern battle, Dostum said troops have now cleared northern Faryab and Sar-e-Pul provinces and “it is now the duty of the security organizations to maintain stability in these provinces.”

Dostum joined the security forces on the frontline in northern Faryab province earlier this month and survived at least two assassination plots and ambushes by insurgents groups.

Before his return to Kabul, Dostum said on Monday that plots against Afghanistan in Sar-e-Pul by Pakistan’s Inter-Services intelligence (ISI) have been foiled after the Taliban were defeated in Kohistanat district.

This comes after the military operation that Dostum was leading managed to stamp out insurgents in the area and restore law-and-order.

He termed the retaking of Kohistanat as a big victory and congratulated the people for it.

Dostum called on Kohistanat residents to unite, and work hard at maintaining security in the district. He also appealed to the locals to prevent the Taliban from making a comeback in the area.

A number of tribal elders in Sar-e-Pul praised Dostum’s efforts to stabilize the province.

Dostum said a few weeks back that he had donned his military uniform and joined troops in the north in a bid to eliminate insurgents, motivate security forces and ensure security.

The mountainous areas in the province can serve as a safe haven for the insurgents therefore the security forces were asked by Dostum to adopt serious measures to prevent the infiltration of the Taliban into these areas; otherwise the locals said they will once again witness insecurity in the district.