You are here: Home / West Asia / The “first Islamic State video with flag” in Afghanistan 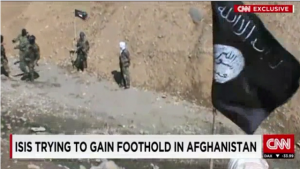 CNN has published the “first ISIS video with the group’s flag” in Afghanistan, according to Khaama.

CNN writes that the group agreed to allow a CNN cameraman film them while they are filming in a valley not far to the south of Kabul.

According to CNN the masked gunmen who are covering their faces like the ones in Iraq and Syria with holding flag of ISIS in their hands says that they are recruiting fighters for ISIS and are in constant contact with ISIS commanders in Iraq and Syria.

One of the man in the video is quoted by CNN as saying “He called us, saying: ‘the IS people have come to Afghanistan — let’s join them.’ Then we joined them and pledged allegiance to them.”

CNN has quoted Colonel J B Vowell, a US military officer,  as confirming the ISIS recruitment but he says that the number is very small “There has been some very small numbers of recruitment that has happened,” he is quoted as saying.

“You have disaffected Taliban who are losing politically and some of the younger, newer fighters are moving to that camp. It doesn’t mean it’s operationally better. We are concerned about it — resources, weapons, capabilities. (But) I don’t see an operational effect.” Colonel J B Vowell.