You are here: Home / MidEastGulf / The female Kurdish fighters winning the war against Islamic State 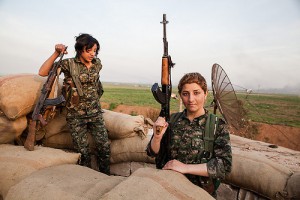 A group of Kurdish women who have traded headscarves for Kalashnikovs have gained ground in the ongoing fight against the ISIL terror group in Syria.

And in the six months since 60 Minutes reporter Tara Brown first travelled to the front lines of the war on ISIL to report on the brave band of freedom fighters, the female troops of the Kurdish YDJ have beaten ISIL back.

ISIL still controls vast swathes of territory across Syria and Iraq, despite an international effort to quash the terror group. Among the forces fighting the fanatics are the Kurdish people of northern Syria and Iraq, who are desperate to preserve their way of life and keep ISIL from enforcing its brutal reign.

Amazed at the efforts of one of the all-female Kurdish units, Brown returned to the warzone this year to find out how the women had fared.

She said it quickly became apparent that amid the public beheadings and atrocities carried out by ISIL, the female Kurdish troops were “the bright spot” in the conflict.

“They are fighting for their way of life and they’re amazingly passionate about this conflict, because it represents everything to them,” she said.

“For them it’s a fight about equal rights – there’s men, women, Arabs, Kurds and Christians fighting alongside each other – everything that ISIL wants to destroy.

“These are incredibly amazing and dedicated woman but a part of me couldn’t help feel some sadness that these were women who could be otherwise attending university or pursuing careers.”

ISIL has its own all-female units – usually battalion-sized formations called “al-Khansaa” or “Umm al-Rayan” that operate throughout Syria.

But the ISIL women wear full burqas and exist to enforce Sharia law and ensure women act according to ISIL’s strict interpretation of Islamic laws.

Last year, when Brown spent a week with the Kurdish troops the town of Kobani in northern Syria was the focal point of the conflict.

ISIL was still riding high on a winning streak and threw a huge amount of troops and even heavy equipment, captured from the Iraqi army, at the town.

Brown said her earlier visit had been constrained to a relatively small area of territory held by Kurdish irregulars.

This time around she said was surprised by how far the Kurds had come.

“They’ve suffered incredible casualties and a lot of their people have been killed – or martyred as they say – but they have pushed ISIL back,” Brown said.

“But it’s incredible when you witness the funeral of these people and you see their photos taped to these coffins and you realise just how young some of them are.

“They’ve made a huge sacrifice.”