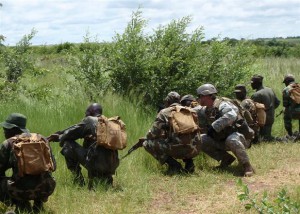 The European Union has said it will offer counter-terrorism training to help east African security agencies improve cross-border investigations and prosecutions in a region hit by deadly raids carried out by Islamist militants.
Fearful militants trained in Africa may strike closer to home; Western powers have trained and equipped security agencies of many east African nations whom they see as a bulwark against the spread of radical Islam, especially from war-torn Somalia. The new programme, to be implemented later this year or early 2016 across Kenya, Ethiopia, Eritrea, Djibouti, South Sudan, Sudan, Uganda and Yemen, will cost 11 million euros (Sh1.2 billion) over five years, an EU official said yesterday.
Under pressure Uwe Wissenbach, EU’s head of political section in Kenya, said the programme would focus on training local law enforcement agencies and judiciaries in how to carry out cross-border investigations and construct criminal prosecutions. “We want to bring together terrorism related law enforcement agencies and help people understand counter-terrorism investigations across borders,” Wissenbach said, adding that EU experts would be brought to assist local agencies.
Wissenbach spoke ahead of a three-day “Countering Violent Extremism” conference, due to start in Nairobi today.
The Kenyan government, under pressure to stop frequent gun and grenade attacks by Somali Islamist group Al Shabaab, is expected to announce a new security strategy at the conference to counter radicalisation and violent extremism. However, more than 400 people have been killed on Kenyan soil in Al Shabaab attacks over the past two years.
Western diplomats say Kenya’s security has been hamstrung by rampant police corruption and agencies often act more as rivals than partners, refusing to pool data so tips might get missed and pieces in the surveillance puzzle might not be put together. Kenya is known for its beautiful scenery that attracts tourists to the country. But the threat of terrorism has dealt a blow to the country’s tourism industry, with Western countries issuing travel advisories. Kenyan security agencies and their allies in the fight against terrorism have turned their attention to foreign jihadists, whose influx is being blamed for violent terror attacks in the country.
By the time Kenya Defence Forces entered Somalia in 2011, reports suggested there were about 400 jihadists from the West in the ranks of Al Shabaab but the numbers have significantly increased.