You are here: Home / Europe / The EU is preparing for ‘boots on the ground’ in Libya and North Africa 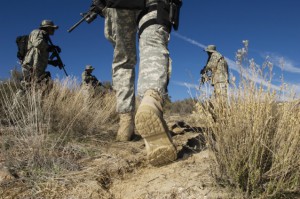 A “broad range of air, maritime and land capabilities” will need to be deployed by the European Union across Libya if it is to take out the migrant smuggling networks in North Africa, the EU has outlined in a strategy paper for the United Nations.

The military plan is to reduce the number of migrants illegally crossing the Mediterranean in dangerously unseaworthy boats to European nations like Italy and Malta. Although the mission is  not yet launched, or even approved by the United Nations, it already appears to be suffering mission creep.

In a 19-page strategy paper seen by The Guardian newspaper, the new plan appears to contradict the insistence of Brussels that there would be no “boots on the ground”.

On the efforts that would be taken to prevent the sailing of smuggler boats loaded with human cargoes, the document says: “A presence ashore might be envisaged if agreement was reached with relevant authorities.

“The operation would require a broad range of air, maritime and land capabilities. These could include: intelligence, surveillance and reconnaissance; boarding teams; patrol units (air and maritime); amphibious assets; destruction air, land and sea, including special forces units”.

The presence of refugees and economic migrants in large numbers along the North African coast is not the main reason for such a significant deployment, as the great flow of people has allowed Islamic State and al-Qaeda terrorists to move undetected to the shores of Europe. The document warns of “militia and terrorist” threats to deployed European forces, raising the prospect of an Afghanistan-style quagmire on Europe’s doorstep.

The paper continues: “The existence of heavy military armaments (including coastal artillery batteries) and military-capable militias present a robust threat to EU ships and aircraft operating in the vicinity… The terrorist presence in the region also constitutes a security threat. Action taken ashore could be undertaken in a hostile environment”.

The volume and developing organisation of terrorist groups in Libya preparing to strike southern Europe by boat, or to conduct clandestine landings for the sake of infiltration, is now concerning European intelligence agencies. Omar al Gawari, the Minister for Information in the regional Tobruk government in former Libya, has warned groups of ISIS fighters will be crossing the Mediterranean “in the coming weeks”, reports Italy’s ANSA.

Speaking to Breitbart London, retired Royal Navy Rear Admiral Chris Parry said of the warning from Libya: “I think there is an existential threat [to Europe from Islamic terrorists using chaos in the Mediterranean to their advantage]… it confirms me belief that threat levels should be led by vulnerability rather than risk-based assesments”.

In an interview with Breitbart last month, Parry warned of the coming likelihood of Islamist “commando” raids on southern Europe by boat. Remarking that when he warned as the Soviet Union collapsed that Islam would be the next major threat to Western civilisation, only to be hushed up by the government, Parry said: “If you look at the maps put out by the Islamic State, it is pretty clear what they want back. Italy, Spain. They want back what they once had. Islam is a very territorial religion.

“If there isn’t the political will or military ability to face down threats off the North African littoral, be it migration, criminality, or terrorism, then we will get progressive erosion. We will get raids on coasts, we will get yachts intercepted at sea, we will get merchant ships subject to terrorist, pirate, or criminal attack.

“The Western world needs to have more self belief in its own values, it has to hold its nerve, and we have to rediscover a lot of self-reliance”.