You are here: Home / Africa / The economics of terrorism in Africa 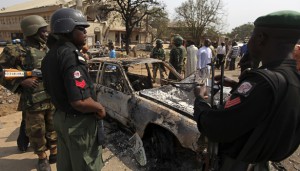 Terrorism on the scale witnessed in Paris last month is nothing new in Africa. In Nigeria, Cameroon, Chad, and Niger, the extremist group Boko Haram – famous for its kidnapping of 276 school girls in 2014 – has inflicted thousands of casualties with suicide bombings and assaults on civilians. In Kenya, the Somali group Al-Shabaab has carried out two major attacks, on Nairobi’s Westgate shopping mall in 2013 and on Garissa University in 2015, as well as many smaller acts of terror.

Meanwhile in Tunisia, the Islamic State has targeted tourists – orchestrating attacks on a museum and a beach resort. And in Mali, shortly after the attacks in Paris, gunmen belonging to an Al Qaeda affiliate stormed the Radisson Blu hotel in Bamako, killing 22 people. Terror, it seems, has become part of the new normal in Africa.

These attacks, and others, have cast a dark shadow across the continent’s long-awaited economic rise. It is not difficult to see why. Terrorism risks derailing Africa’s economic and political development in six important ways.

For starters, there is the sheer scale of the humanitarian catastrophe. Since 2009, Boko Haram alone has killed more than 10,000 people in Nigeria and has driven nearly a half-million from their homes. Traumatized populations have fled to refugee camps in Cameroon, Chad, and Niger, where malnutrition and disease are becoming increasingly prevalent – especially among children.

Second, terrorism is undermining GDP growth and weighing down overall economic performance in affected countries; the economy of northern Nigeria, for example, has been devastated by the ongoing violence. The International Monetary Fund now includes terror threats among the major risks to the economic outlook in Nigeria, Tunisia, and Kenya.

Already, economic indicators in these countries have been revised downward after terrorist incidents. Following the attacks by the Islamic State, for example, Tunisia’s projected annual GDP growth for 2015 was cut from 3% to 1%. The tourism sector is expected to experience a 45% decline – implying a drop in revenue of some $1.1 billion. The damage to the sector – and, more broadly, to investor confidence – will trickle across Tunisia’s economy, pushing down output, fiscal revenue, and foreign reserves.

Third, the fight against terrorism is sucking up scarce financial resources. Scaling up military missions is costly, and the unpredictability of terror strikes often requires extra spending on security, which sometimes causes governments to miss their fiscal targets. After the Garissa University attack, for example, the Kenyan government increased security-related spending by 0.3% of GDP and provided additional financial assistance to the tourism sector.

In Central and West Africa, the fiscal pressure has been especially intense. In addition to the outlays required to equip the armed forces engaged against Boko Haram, Nigerian officials estimate that billions of dollars will be needed to rebuild ravaged infrastructure in the north. Similarly, Chad’s soldiers fought alongside French troops against terrorists in Mali, and now they have coalesced with those of Nigeria and Cameroon in fighting Boko Haram. In April, the country was granted $170 million in debt relief – the payoff for years of economic reform. But now it is being forced to use part of its hard-won fiscal space to finance the fight against terror.

Fourth, the countries at risk are among the most promising frontier markets. In Nigeria, which recently became Africa’s largest economy, a dynamic private sector has been diversifying an economy that has long been dominated by oil production. Similarly, Kenya, home to a thriving ICT sector, is leading the world in the rollout and leveraging of mobile money. If these economies are upset, they risk dragging down Africa’s overall performance.

Fifth, terrorism is undermining state building. In most African countries, the military is weak and insufficiently equipped to handle this new threat, whereas terrorist groups are often well-funded and deploy committed combatants equipped with state-of-the-art weapons. Such face-offs undermine the state’s monopoly on the means of violence and pose a challenge to its power and legitimacy.

Finally, the risk that fighting terrorism poses to civil liberties is especially acute in Africa, where institution building is still an ongoing process. Some non-democratic regimes may take advantage of anti-terrorism policies to prey on their own people. There is also a threat to the fabric of society if fear of Islamist extremism leads Muslims to be stigmatized or marginalized.

Most of the civil conflicts that held back Africa’s development for decades have finally come to an end. But terrorism risks undermining the continent’s hard-won stability and strong GDP growth. Localized security issues are metastasizing into macroeconomic threats. This new danger to Africa must be addressed if the continent is to maintain its upward momentum.