You are here: Home / Senza categoria / The “drone’s power” against Al Qaeda 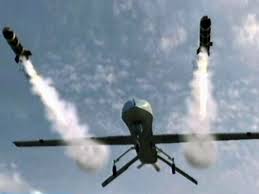 The confirmation Tuesday that the U.S. has killed Al Qaeda’s second-in-command allowed the White House to declare a “major blow” against the group — a rare piece of good news about terrorism at a time when the Islamic State remains a potent threat.

“The U.S. government is in the business of killing terrorists — and this week, business is good,” one defense official told POLITICO.

The CIA drone strike that killed Nasir al-Wuyashi, the leader of Al Qaeda’s Yemen branch and deputy to Al Qaeda’s chief, Ayman al-Zawihiri, was just one of several successful attacks that have taken out key Al Qaeda-affiliated leaders of late.

Wuhayshi’s death followed the reported killing of another Al Qaeda-affiliated terror leader, Mokhtar Belmokhtar, targeted by an American airstrike in Libya last weekend. (U.S. officials have not confirmed the death of Belmokhtar, an Algerian who led terror operations in North Africa.)

The U.S. has taken out several other important Al Qaeda figures this year. The list includes Adam Gadhan, an American citizen and longtime English-language spokesman for the group; Ahmed Farouq, the leader of Al Qaeda’s India branch; and two leaders of Somalia’s Al-Shabaab, which has close Al Qaeda ties. One of them, Adnan Garaar, orchestrated the 2013 attack on a Nairobi shopping mall that killed 67 people.

Those successes against Al Qaeda — following years in which the U.S. decimated Al Qaeda’s core leadership in Pakistan — stand in contrast to Obama’s record against the Islamic State. The U.S. has taken out few of that group’s senior leaders and has been unable to slow its growth and popular reach.

But the advances against Al Qaeda are arguably more important, according to some experts, who say that bin Laden’s group has always posed a more credible threat against the U.S. homeland than the Islamic State, also known against ISIL.

“People have been completely fixated on ISIL. Al Qaeda has been eclipsed by ISIL, but it is Al Qaeda that is most likely to carry out an attack against the United States at home,” said Daniel Benjamin, who served as the top counterterrorism official at the State Department from 2009 to 2012.

“If you consider the catastrophic damage that was done to Al Qaeda in Pakistan, the strikes against it in the Arabian Peninsula,” he added, “I think the president has done quite an impressive job of degrading Al Qaeda. The administration has continued to go at Al Qaeda decisively and I think it took some determination to keep going through with this.”

A White House statement on Tuesday declared that Wuyashi’s killing “brings us closer to degrading and ultimately defeating” Al Qaeda and its affiliates.

Neither Al Qaeda’s core Pakistan leadership nor its affiliates have attempted a serious attack against the West in many months, although the gunmen who massacred 11 people at the Paris newspaper Charlie Hebdo in January had previously trained with the group’s Yemen affiliate, Al Qaeda in the Arabian Peninsula (AQAP).

The successes against Al Qaeda show that Obama continues an aggressive drone war against the group — although its pace is down significantly in both Yemen and Pakistan. According to figures maintained by the Long War Journal, the U.S. has mounted eight drone strikes in each of those countries this year, as compared to about two dozen in each country by the end of last year.

For Obama that may represent a balance between security and politics. Obama has been under pressure to curtail the drone program from both liberals who find the remote-control strikes distasteful and from national security experts who warn they are a quick fix with long-term downsides that some call counterproductive.

He also faced intense criticism in April after the strikes that killed Gadhan and Farouq unwittingly killed two hostages as well, including an American, Warren Weinstein. Obama said he “profoundly regret[s]” the episode, but he did not halt or revamp the overall drone program.

But analysts note two major caveats to Obama’s bragging rights against Al Qaeda. One is that the group remains highly dangerous. Still on the loose in Yemen is Ibrahim al-Asiri, a skilled bomb maker who U.S. officials fear has devised explosives that can elude airport security screening.

Al Qaeda has also gained territory in recent months. Its Syrian branch, Jabhat al-Nusra, has made important advances in that country — though that wing of the terror group has said it is focused for now on Syria’s civil war, and not attacks on the West.

AQAP has expanded its territory amidst the recent anarchy in Yemen. But the group is also now battling with the country’s Houthi rebels, which consider the group an enemy.

While the death of Wuyashi is a setback for AQAP, the group has already named a successor. It may be even more significant for Al Qaeda’s global operations, given that Wuyashi had recently become deputy to the group’s leader, Zawahiri, and was seen as a possible successor to bin Laden’s former number-two man, said Seth Jones, a terrorism expert with the RAND Corporation.

Zawahiri has proven to be a weak leader who has failed to maintain Al Qaeda’s relevance amid the rise of ISIL. The Syria-based radical group, an offshoot of Al Qaeda’s former Iraq branch, has drained strength and funding from Al Qaeda.

That raises the question of whether Obama has made any net gain against radical Sunni terrorism. Jones said it’s hard to tell.

“The relative weakness of Al Qaeda is caused by a number of factors. One is U.S. pressure on the organization,” Jones said. “But the Islamic State has gained ground at the expense of Al Qaeda.”