You are here: Home / FakeNews / The downing of flight MH17 and satellite images 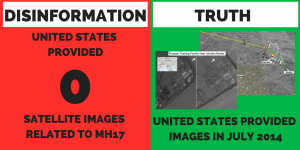 The downing of flight MH17 has been one of the most lied-about events in recent years, and the disinformation campaign surrounding the tragedy shows no sign of abating, like reported by euvsdisinfo.eu.

Revelations that a Russian missile shot down the passenger airplane over eastern Ukraine in July 2014, killing all 298 people on board, have triggered a flurry of fresh disinformation stories from Moscow.

The charge of Russian involvement was made on May 24 by the Joint Investigative Team (JIT), the Dutch-led international group of investigators tasked with probing the crash.

Russian officials and pro-Kremlin media outlets have sought to discredit the JIT’s latest findings, including by claiming that the United States never presented a single incriminating satellite image as pledged in the aftermath of the tragedy.

Russian defence ministry spokesperson Maria Zakharova blamed Washington for providing zero “satellite images, the presence of which was announced immediately after the catastrophe.”

Zakharova, however, would be hard pressed to back up her claim considering that some of the satellite images released by the United States on 22 July 2014 — just five days after the plane’s downing — were widely published and scrutinised in the media.

U.S. officials say the images and other sensitive intelligence, most of which remain classified, show that Russia trained and equipped the pro-Russian separatists in eastern Ukraine responsible for the attack on flight MH17.

One publicly available image shows what U.S. officials identified as a Russian military installation near the southern city of Rostov, close to the border with Ukraine, which served as a support base for separatists in eastern Ukraine. The installation is seen to grow dramatically between 19 June and 21 July 2014.

JIT head Fred Westerbeke has confirmed that his team received satellite images provided by the United States after the crash.

To deflect the blame for the tragedy, Russia has released its own “evidence” allegedly proving that the plane was in fact shot down by Ukraine.

The images, presented by the Russian defence ministry at a press conference four days after the Boeing went down, were later proven to having been falsified using Photoshop software.