You are here: Home / Senza categoria / The death of father of terrorism 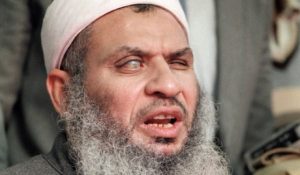 While mourning Sheikh Omar Abdul Rahman, who died in prison cell in U.S. – some try to portray him as an innocent victim and an unjustly treated hero. He is everything but that!

He might be the only one who grew up, lived his life and died believing in violence. He has lived as a conspirator and instigator since the days of Egyptian President Gamal Abdel Nasser, Anwar al-Sadat and Hosni Mubarak. He is the only one whom they agreed to make accusations against and imprison him.

Blindness is not lack of sight but lack of insight. Many believed that a blind sheikh can’t be an evil member in terrorist organizations, but all security forces that had dealt with him had unanimously agreed that he could be one of the most dangerous men they’ve ever met.

He has been an extremist since 1963 when he was a student at Al-Azhar as he was influenced by Sayyed Qutb and his extremist ideology. The sheikh was then suspended from teaching in Al-Azhar and arrested during Abdul Nasser presidency for instigation.

Later, President Sadat released him among thousands of Islamists and allowed him to resume teaching. Yet, the sheikh betrayed Sadat and issued a Fatwa that allowed Gamaa Islamiyya to kill the president.

He was imprisoned after the assassination of Sadat, and pardoned by President Mubarak.

Abdul Rahman then left Egypt to Sudan, a passage for major terrorists, after which he joined bin Laden and Zawahiri in Afghanistan. He played a role in their religious authority and inspired young fighters.

U.S. repeated the mistake of Sadat by trusting him and then granting him a visa. He toured three mosques in New York instigating hatred against the U.S. government. When the Department of State requested the cancellation of his visa, Immigration Department said it had already granted him a permanent visa. After that, his “Green Card”, which allowed him to work inside the U.S. was revoked. He then attained a political asylum ruling from the court.

Only a year later, in 1993, the first attack on World Trade Center happened when a number of terrorists bombed the foundations. The building didn’t collapse but thousands were injured in the explosion and six others died.

The four men arrested for conspiring were students of the blind sheikh. He was put in jail with them for conspiring for multiple operations including plotting to attack the U.N. headquarters.

Many didn’t believe the list of targets to be realistic and thought the prosecution may have exaggerated in framing the sheikh, even when the world trade center was attacked again in 2011 and it was evident that Abdul Rahman sent a letter from jail to his friends in Qaeda, Afghanistan calling for attack on the World Trade Center.

He spent 25 years in prison after an unmatched long history of terrorism.

This is Omar Abdul Rahman who was mourned by extremists who always justify terrorism and terrorists.