You are here: Home / Europe / The dangers of UK’s new counter-Extremism strategy 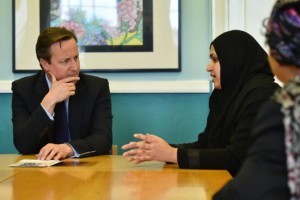 There are all sorts of reasons why democratic governments fail; scandal, wars, economic collapse.

And sometimes they go mad. It’s as simple as that. UK’s Margaret Thatcher in the late 1980s seemed to be invincible. By some inexorable paradox, this made her vulnerable.

She started to behave irrationally. Hence the poll tax, the sadistic bullying of trusted colleagues – and in due course her shocking defenestration in November 1990.

Prime Minister David Cameron’s administration has showing some of the same hubris since the shock Conservative election victory in May this year.

The humiliation of Labour, and the demolition of the Liberal Democrats, apparently left the Conservatives in control of the political landscape. Cameron has more untrammelled power than any British prime minister in a generation.

Yet in recent weeks we have seen a succession of errors. In domestic terms by far the most important has been the implosion of Chancellor George Osborne’s budget of last July.

As part of his austerity plan, Osborne slashed tax credits for the working poor, a move which will cut more than £1,000 ($1,500) a year from the average annual income of more three million already severely hard-up people.

He faces a mutiny not merely in the country, but the Conservative Party itself.

And yesterday came shocking news. It emerged that Britain’s Ministerial Code – the cabinet office document which sets ethical standards for government – has been furtively amended in the wake of the Conservative victory.

With the Liberal Democrats out of power and out of the coalition, ministers are no longer required to comply with international law or (for that matter) international treaty obligations.

This change is so far unexplained. But ignoring Britain’s international treaty obligations will certainly make it far easier for ministers to deport terror suspects such as Abu Qatada, dispatched by Britain to Jordan in 2013 only after a long argument with the European Court of Human Rights.

Britain was one of the first states to ratify the European Convention in 1951. If we were to leave it, we would join Belarus as one of a tiny group of states outside it and send a ghastly message to the world.

And here is a third very telling indication that, less than six months since the election, something has gone awry with the Cameron government.

This week the prime minister and Home Secretary Theresa May published the government’s Counter-Extremism Strategy. This 50-page document, says Cameron, is meant to “build a more cohesive country for our children, our grandchildren and for every generation to come”.

This is an admirable objective, but there is no chance that this noxious document will build more cohesion. On the contrary, I believe that it will drive Britons even further apart.

We learn in this document that Cameron and May are to set up a sinister-sounding “extremist analysis unit” in the Home Office.

This unit will oversee the creation of a secret list of “extremists”. Like sex offenders, they will be banned from working with children. According to some reports (though I cannot find this explicitly stated in the document) the government the power to close Mosques. There will be new powers of censorship and banning orders for those deemed ‘extremist’.

Nobody in their right mind denies that there is a terrorism threat in Britain, or that is the fundamental task of government to protect its citizens: Home Secretary May would be negligent if she did not take precautions.

But I believe that this week’s document will do nothing to stop terrorism, while going far towards alienating the vast majority of ordinary, non-violent Muslims.

I am far from alone in this belief. As far as I can tell, many experts in the police and the security services are of the same opinion. One central figure has even spoken out – Peter Fahy, chief constable of Greater Manchester Police.

Sir Peter’s comments carry special weight because he speaks for the police as a whole on the prevent strategy. He told the Guardian newspaper of his alarm that “efforts to control extremist narratives will limit free speech and backfire if we don’t get the balance right”.

His comments raise a troubling question. Why is the Cameron government embarking on a counter-extremism strategy which the majority of the experts in the field – including the police and elements in the intelligence services – fear may be misguided?

I think there are two reasons. The first is political. With his announcement that he would step down as prime minister before the next election, Cameron has set in motion a leadership contest. May has a constituency on the authoritarian right of the Conservative Party. It (along with large sections of the mainstream media) lapped up her speech this week.

The second is ideological. The Conservative government has reshaped its counter-terrorism strategy to embrace something which it calls “non-violent extremism”.

This doctrine widens the pool of suspicion way beyond those actively contemplating violent acts. There is now a new category: those who harbour (allegedly) unsavoury thoughts. Hence Sir Peter’s alarm about free speech.

But the worries about the term “extremism” stretch far wider than free speech. Who defines who is and who is not an extremist? What are the British values which these so-called extremists are alleged to oppose?

The latest Home Office document has not come up with anything resembling a convincing answer. This failure to come up with a definition leaves behind the suspicion that Conservative politicians are engaged in a form of dog-whistle politics.

In other words, the latest document is sending out a message about British Muslims which is not made fully explicit: you are not wanted.

This would be terrible. Yet there are good things in the report. It talks about the menace of Islamophobia and neo-Nazi extremism with a force I have never before seen.

Furthermore this week’s announcement of a new category of anti-Muslim hate crime is hugely welcome. The police will from now on be legally obliged to record Islamophobic offences, as has long rightly been the case with anti-Semitism. This is well overdue. In an otherwise wretched week for those who cherish traditional British liberties, three cheers for that.