You are here: Home / Europe / The Czech government approves expansion of Czech military’s missions to Iraq, Afghanistan and Mali 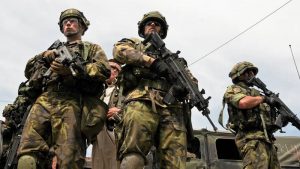 The Czech government approved the deployment of about 270 further soldiers to Iraq, Afghanistan and Mali this year, the Government Office press section has told CTK according to praguemonitor.com.

The Defence Ministry’s proposal also includes the plan of foreign missions for the next two years. Soldiers are to take part in the same missions as at present and should also begin to police the airspace of the Baltic region. The reinforced foreign operations would incur costs of 2.1-2.4 billion crowns annually.

The current mandate for foreign missions allows for the deployment of 806 Czech soldiers. Apart from Afghanistan, Mali and Iraq, they operate also in the Golan Heights, Sinai and in Kosovo.

The parliament is yet to assess the proposal. The minority cabinet of PM Andrej Babis (ANO) will have to elicit support of the other parties for the plan.

Civic Democrat (ODS), TOP 09 and Pirates MPs criticise the fact that the draft is being proposed by a cabinet that resigned after it lost a confidence vote in January.

Christian Democrats (KDU-CSL) would welcome if the cabinet had support of the parties in parliament. The Communists and Freedom and Direct Democracy (SPD), with whom President Milos Zeman recommended Babis to cooperate on Thursday night, both have had reservations towards a larger military involvement in missions.

Should the proposal be approved, an air force unit with fighter planes would newly be deployed in the Baltic region and, still this year, some further 140 soldiers would be sent to Afghanistan, where the Czech military currently has a mandate for 250 soldiers. While at present the soldiers are in Kabul, they are to newly go to the Logar province to train a special Afghan police unit, and to the Herat province to assist with the training of Afghan soldiers.

The mandate in Mali would be expanded from 20 to 120 soldiers. The Czech military wants to have another unit in the country to guard and accompany soldiers of the EU’s training mission. The operation is to be expanded to the surrounding Sahel region countries in connection with the newly prepared EU mandate of the mission that is to to begin in 2018. A small expert team of some 30 soldiers could join the UN mission in Mali.

More soldiers would also be sent to Iraq as a chemical unit could be deployed in the country in 2019. The Czech military also awaits the NATO’s plan on deploying its own mission in Iraq, which Czechs could then join.