You are here: Home / Senza categoria / The culture of rape within ISIS, and the questions that arise 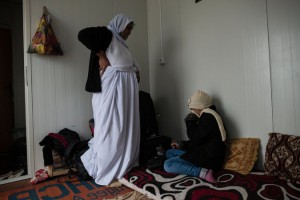 How do fighters with the Islamic State access the birth control pills they provide to their sex slaves?

What do the fighters’ wives think of these slaves?

These were some of the approximately 150 questions that readers posed to Rukmini Callimachi, a Times reporter who has written about the Islamic State’s use of modern family planning practices to continue its practice of raping captives, during a live discussion on nytimes.com last week on the Islamic State and its industry of rape.

Ms. Callimachi, who has written extensively about Islamic extremism and the Islamic State, which is also known as ISIS and Daesh, was joined by Liam Stack and Matthew Barber. Mr. Stack is a Times reporter who spent several years covering the Middle East from Cairo, and Mr. Barber is a University of Chicago doctoral student and the Iraq executive director of Yazda, an organization that helps victims of the Islamic State’s system of sexual slavery.

The questions and answers have been condensed and edited for clarity.

Q. The thing that really hit home for me was the mother of a Daesh fighter helping with obtaining birth control. Is it rare for fighters to be working with their family? BOBBY ELLIS

RUKMINI CALLIMACHI A majority of the aggressors, according to the interviews I did, were Syrians and Iraqis. And these fighters are living with their families. A lot of the Yazidi girls told me that one of the added abuses was the way they were treated by the wives of the fighters. One middle-aged Yazidi woman described to me how the wife of the man who had enslaved her would not so much as let her take a glass of water out of the fridge. She always had to ask permission, even to drink water.

An added layer of complication was that many of the wives, who had presumably married the fighter willingly, were seething at his sexual relationship with the slave — they were essentially jealous. And they punished the Yazidi slaves in whatever way they could.

MATTHEW BARBER I know of one jihadist who brought home a Yazidi girl, and his family (including his mother) was upset because they saw Yazidis as something “dirty” that would defile the home. They went through a process not only to force that Yazidi girl to convert to Islam, but to take her to an ISIS sharia court to make the conversion official.
Continue reading the main story
Related Coverage

Q. It seems to me that the risk of being subject to rape and/or slavery should constitute a strong argument to support offering shelter in the U.S. to women from the areas infested by ISIS. Is something being done in this direction? ALEX

LIAM STACK The U.S. has taken in a very limited number of refugees and asylum seekers from areas affected by the Islamic State, regardless of their ethnic or religious background or whatever trauma they may have experienced during the conflict.

MATTHEW BARBER Germany has the highest numbers of Yazidis in diaspora. The German government has conducted a program to take hundreds of female enslavement survivors for treatment in Germany. However, many Yazidis are finding it difficult to adapt in Germany.

There should also be a focus on fixing the problems in Iraq so that Yazidi will feel hope that they have a viable future in Sinjar.

Q. Could you tell us a little about the Yazidi people? How are they related to the Kurds of northern Iraq and the greater region? JOHN

MATTHEW BARBER The Yazidis are a Kurdish-speaking indigenous people practicing a religion made up of many ancient, local beliefs and practices, as well as ideas absorbed from other major Near Eastern traditions.

Q. Were there any Yazidis colluding with ISIS, out of survival, to create this rape industry?

And also, how do the Yazidi family members view their mothers, daughters, sisters, wives who have been victimized? Are they still accepted in their family and community? SARA

RUKMINI CALLIMACHI I have not come across any stories of Yazidi complicity in the violence. By contrast, practically every woman I interviewed was distraught at the way in which the Kurdish authorities, who previously controlled and were responsible for military security on Sinjar Mountain, behaved. The Yazidis claim that before ISIS attacked on Aug. 3, 2014, the Kurdish pesh merga (the name of the security force in northern Iraq) essentially abandoned the mountain.

One of the heroes of the resistance is a Yazidi man who claims that he saw a Kurdish pesh merga officer abandoning his post — literally jumping out of a pickup truck mounted with an antiaircraft machine gun, leaving the keys in the ignition. The Yazidi man ran to the car, jumped in and drove it up the switchbacks.

I interviewed him late last year, and he said he had no idea how to use the antiaircraft gun but he and other Yazidis managed to point it in the direction of the advancing ISIS troops and opened fire. If you go to Sinjar Mountain today, you will see a monument that they erected in honor of this Yazidi fighter — it’s basically a statue of the pickup truck with the mounted machine gun, cast in concrete, and positioned on the switchback where he allegedly used it to fire at ISIS.

MATTHEW BARBER Tremendous progress has been made on the part of the Yazidi community regarding the women and girls who have returned home. Yazidis are not allowed to marry outside the community, whether male or female. Yazidis who have had sex with (or been raped by) a non-Yazidi person have traditionally been exiled from the community.

But the crisis of Aug. 3, 2014, forced the Yazidi community to adapt. The Yazidi religious leadership issued official edicts to the effect that women who were raped were to be accepted back into the community as Yazidis, and to not be stigmatized for violence against them for which they were not responsible.

But stigma is still a major problem. Many women whom we work with are being abused verbally and emotionally by relatives who are blaming them for their rapes.

Q. Where are ISIS fighters getting the massive amounts of birth control drugs to administer to these young women? JARAUN

MATTHEW BARBER Many drugs were already present in the hospitals of Mosul and Tel Afar, and other places conquered by the Islamic State. But it is likely that they receive their ongoing supplies via Turkey.

Q. Do you think it is morally acceptable to arm these women to stun/poison their rapists and other ISIS members/supporters? DEE

MATTHEW BARBER It is not possible to arm the women who are already in captivity; if we had such access to them, they could be rescued. And further, the Islamic State is not enslaving new groups of women. All the Yazidi women who are in enslavement were abducted when ISIS first attacked the Sinjar region in northern Iraq in August 2014.

Q. What type of psychological support is available for the women who have escaped their captivity? MIA KIRSHNER

MATTHEW BARBER At Yazda we are doing what we can to provide emotional and psychological support to women and girls who have been rescued from the Islamic State’s captivity, but we are very limited in terms of personnel with the appropriate skill sets. Other organizations are also doing what they can, but in general, the entire region is in need of more psychologists, psychiatrists and therapists. Doctors with clinical practice in these fields are largely absent in Iraq and the Kurdistan region.

Further, it is not just the survivors of enslavement who need help from qualified therapists; the entire displaced Yazidi community in Iraq — over 300,000 people are still in camps — needs help.